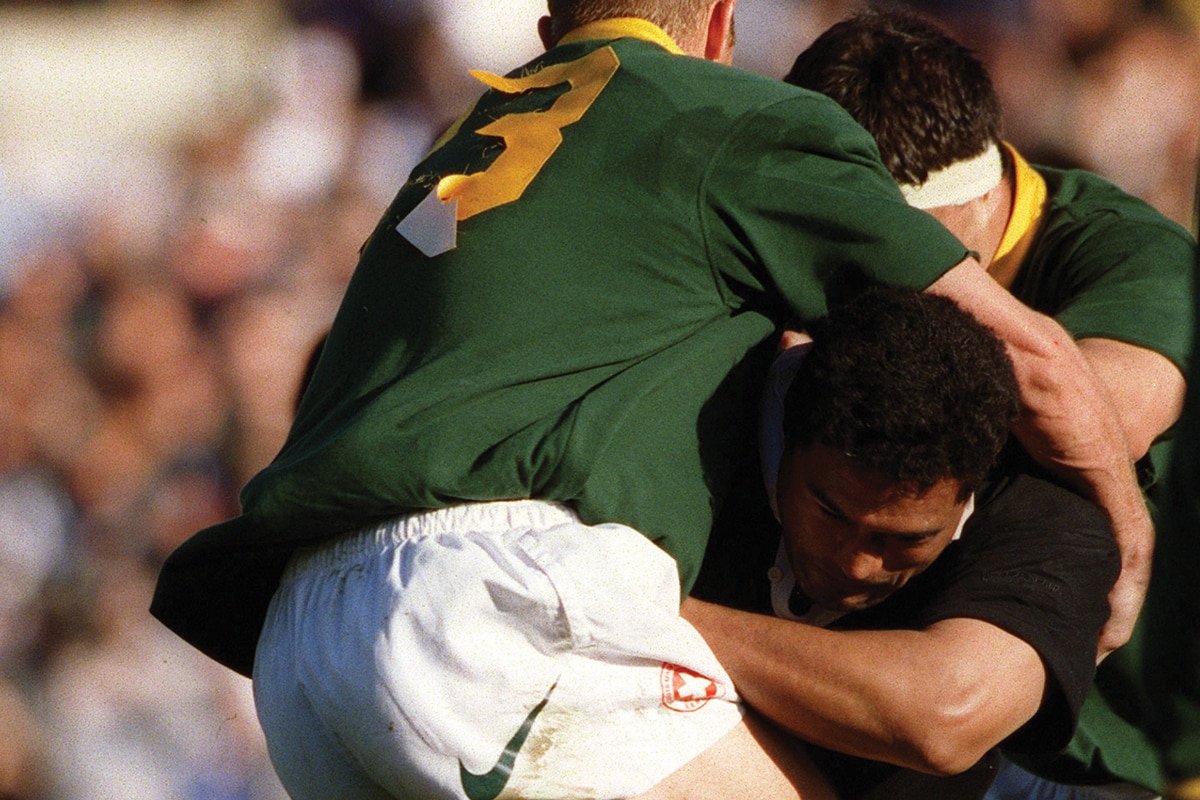 Olo Brown and the All Blacks of 1996-97 had the better of South Africa, but that didn’t make them any easier to play.

Campbell Burnes sets the scene for the reprise of one of rugby’s great rivalries, which must now take place in the unlikely setting of the eastern seaboard of Australia.

The All Blacks play the Wallabies more than any other team in world rugby.
They hate to lose to the English more than any other team in world rugby.
They have developed rivalries with eight other teams in world rugby, including the Lions.
But from a historical perspective, in particular, the All Blacks and the Springboks form the ultimate rugby rivalry. They have done so since the early salvoes were fired in 1921. Politics, it is true, has mixed uneasily with sport since those early first encounters. But that has only served to further ramp up the interest.
And now, as we stand on the cusp of the 100th Test match between these two mighty tribes, in the unlikely setting of Townsville, there are several added layers to spice up this eagerly awaited clash of the rugby titans.
For one, the All Blacks have not played the Springboks since Rugby World Cup 2019, a Covid-enforced hiatus of two years. We miss them. They are also RWC holders and the No 1 ranked side in the world, fit to call themselves world champs. They have just emerged victorious from a bitterly contested, bizarre series against the Lions. Their talismanic captain, Siya Kolisi, the first black man to captain the Boks, was man of the series, not long after testing positive for Covid.
Secondly, Ian Foster was recently rubber-stamped as the All Blacks coach through until the next World Cup. There is a school of thought that his charges have yet to be fully tested physically and mentally. There is a school of thought that the Boks will bring that challenge and may well expose a softish underbelly among this All Blacks team, a team full of potential yet one that still has the shadow of RWC 2019 failure hanging over it.
For those who might look into the detail of the professional rugby history stats, it might appear that the Springboks are just another team that suffers at the hands of the all-conquering All Blacks. The latter has dropped just two Tests to the Boks in the last decade, and who can forget the 2017 57-0 blanking in Albany? But dig a little deeper and one sees that, aside from three blowouts, the scores have invariably been tight. The Boks were the last team to topple the All Blacks in New Zealand (2018), and the 2015 RWC semifinal was as close as 20-18.
For those who grew up in the 1980s and recall rugby entering the consciousness post-1981, South Africa and its rugby carried mystique and mystery. There were tales of titanic clashes from tours past, of tough, sinewy, always white, Boks who went by names like Ebbo Bastard, Salty du Rand and Flippie van der Merwe. We rarely saw them on TV so had to read about them in the tour books from the 1960s and ’70s, with Ace Parker and TP McLean the authors, among others.

I knew about Hennie Muller before I read about him, thanks to the gut-busting runs which carried his name that our First XV captain loved to inflict upon us in 1989. Muller was, of course, the Boks No 8 with a big engine who disrupted the 1949 All Blacks backs with his bruising defensive game.
The Boks never lost a series anywhere from 1896 to 1956. They were the game’s unofficial world champions, much to New Zealand’s chagrin. They won four Grand Slams before the All Blacks clinched their first in 1978. They were the toughest team to beat. Now the All Blacks take that honour.
Such was the interest in the looming 100th Test match that the rivalry spawned two books this year, Ron Palenski’s Brutal and Jamie Wall’s The Hundred Years’ War. They follow the likes of Spiro Zavos’ 1997 Winters of Revenge and Graham Hutchins’ 1996 A Score to Settle.
Brutal, which carries a rare photo of a bloodied 1965 All Blacks forward pack against the Boks on its cover, is an apt title. It encapsulates the brutal nature of the rugby, not just in relation to Jaap Bekker kicking ‘Tiny’ White in the spine or Dean Greyling headbutting Richie McCaw, but the invariably relentless physicality of both teams when they face each other.
Australia can hurt you in different ways. France and England, on their day, can trouble the All Blacks. But since the first Test at Carisbrook in 1921, the Boks have consistently been up for it and the All Blacks have needed to match that fire and brimstone, while upping their game at the set-piece and collisions, not to mention in the goalkicking stakes, which cost them badly in 1949 and 1976.
Palenski helps walk us through this century-long history, but his research was not borne of any deep admiration of South African rugby.
“To be frank, I’ve never had a lot of love for South Africa and its rugby, so I hadn’t read about it as much as other teams. In some respects, this was a journey of discovery,” says Palenski.
He uses the fitting expression “supine acquiescence” to characterise the NZRFU’s decisions to not select Maori for the 1928, 1949 and 1960 tours of South Africa, as per the instructions of the South African Rugby Board. It remains a stain on our game and its administration.
“Stan Dean and others argued that by not sending Maori and Pacific Islanders to South Africa, they were looking after them and their interests,” says Palenski.
“You could look at that as naïve. The obvious thing to do was to say to South Africa that we choose our team and if you don’t want that team then we don’t choose to be there.”
But tour they did, morals be damned.