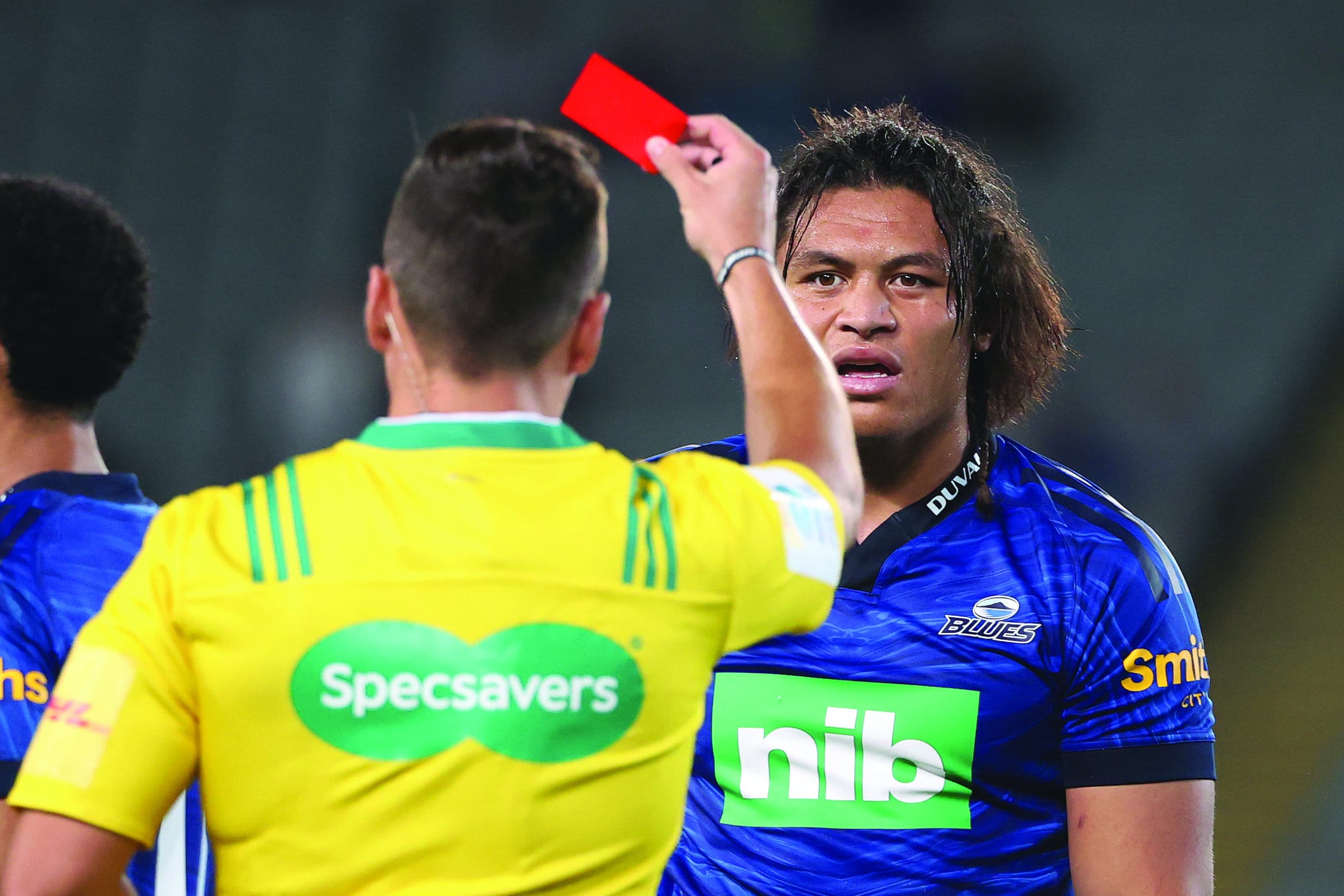 Common sense did not apply in Caleb Clarke’s sending off for an accidental play which saw Tomasi Alosio injured.

Depending where you sit on the spectrum, the officiating of contact to the head is either becoming a blight on the game, or necessary action to protect player safety. Middle ground is often hard to find in this debate.

Two years ago, World Rugby issued a directive designed to give clear guidance through the head contact process as a result of a comprehensive review of the high tackle sanction framework actioned at the player welfare symposium in Paris. The review group featured a mix of players, coaches, referees, medics and disciplinary representatives including Conrad Smith, Dave Rennie, Joe Schmidt, Jaco Peyper, Gregor Townsend, Paddy O’Brien and Wayne Barnes. Schmidt commented at the time:

“Despite the disruption of the global pandemic, the review process, which started last March, has been highly collaborative with excellent contributions across the multi-disciplinary group. The head contact process will be regularly reviewed with the ambition to ensure it continues to reflect and support the current playing landscape.”

It is worth noting that this major shift in rulings around contact with the head foreshadowed a class-action lawsuit filed in late 2020 against World Rugby, England’s Rugby Football Union (RFU) and the Welsh Rugby Union (WRU) which alleges a failure to protect players from the risks caused by concussions. Rugby World Cup-winning England hooker Steve Thompson is among the highprofile plaintiffs who revealed he has been diagnosed with early onset dementia.

In ruling on any incident, today’s officials are guided by the following:

New Zealand Rugby national referees manager Bryce Lawrence says this framework stipulates intent should be a major consideration. “This process shows there is room for common-sense decisions and at times a collision is deemed ‘not foul play’,” Lawrence says. “Overall, player safety is of paramount importance for everyone involved in NZ rugby and across the globe, and all coaches, players and referees understand and support the strong stance World Rugby have led around foul play and foul play involving direct head contact.”

Lawrence’s argument about common sense being applied is not always evident, though. This is where most fan frustration stems from. In terms of suspensions, we have also seen Caleb Clarke’s accidental chargedown incident handed the same three-week punishment as others, such as Crusaders hooker Shilo Klein, who demonstrated clear intent. Several accidental incidents have contributed to a spate of cards this season, including Moana Pasifika midfielder Levi Aumua (yellow) and Crusaders lock Hamish Dalzell (red). Richard Kahui’s head clash with Highlanders first five-eighth Mitch Hunt, which was then overturned by the judiciary, is the latest example.

Waratahs prop Angus Bell was also cleared by the judiciary after being red carded for his tip tackle. In these instances, the judiciary and referees are not on the same page. Referees cannot be the only figures in the spotlight, however. It’s clear these rulings are here to stay. Techniques and attitudes must, therefore, change – and that ultimately falls on coaches to drive lower body height into the tackle area. The Blues recently released a video with defence coach Craig McGrath having the ball taped to a tackle pad while telling his players to hit under the ball. Lawrence admits, though, rugby will always produce mistakes.

“Coaches and players are spending time at trainings working on technique – lowering tackle height, tackling under the ball and making sure they are wrapping the inside arm in the tackle. It is proving a challenge for some players to adjust their technique and, realistically, it may take a season or two for players to change habits, but everyone understands technique and attitudes need to change,” Lawrence says. “In a high speed, contact sport, at times players get it fractionally wrong and this leads to head contact, and these are the times the match official team have to judge the incident using the four-step head contact process.

“Referees, assistants, TMOs make decisions on a case-by-case scenario and in all foul play incidents they consider the degree of danger/force, reckless or intentional versus accidental. They also take in the whole game context which can include game trends, game intensity and things like weather conditions.”

“Not all of these have been for head contact infringements, and while we have seen an increase in red cards for head contact incidents, the decisions and actions taken by match officials has been positively supported by World Rugby referee management,” Lawrence says.

“When a player receives a red card, they then have the right of an early guilty plea and accept the sanction or they can appeal the decision and go to the judiciary and present their evidence. Occasionally, this means the original onfield decision is overturned or revoked and match officials accept the off-field judicial process can form different views after receiving evidence and reviewing multiple angles of the incident.”

A not uncommon divide has emerged between the north and south about the ability to replace a red-carded player after 20 minutes. In essence, the south believes this enables the contest to be preserved, particularly in the instance of an early send off. The north, however, subscribes to the theory that a 20-minute red card is not enough of a deterrent to foul play.

It remains to be seen whether this rule trial will be adopted beyond Super Rugby and the Rugby Championship but with World Rugby based in Dublin, it often sides with the north. “In Super Rugby we have had the 20-minute red card trial for two seasons,” Lawrence says. “This was brought in to protect the contest, as fan feedback told us they “switched off” or “the game was often over” when a red card was issued early in a match. Super Rugby has been pleased with the trial and on some occasions the team who has received red has still been able to go on and win the match which shows the 20-minute period keeps the game alive.

“Coaches, players, and Super Rugby clubs are all supportive of the 20-minute red card trial. NZR continues to believe the 20-minute red card and off-field judicial process is enough of a deterrent to foul play.” The worry for World Rugby is the trend in the south of increasing red cards not only threatens to overshadow next year’s global showpiece in France, but turn frustrated fans off the sport. Striking the balance on the accidental incidents, and embracing common sense officiating rather than erring on the severe side, appears the key missing ingredient at present.

Lawrence, however, points to the north where a reduction in red cards during the Six Nations offers hope games can be played without compromising their integrity with frequent send-offs. “The head contact process is used in all levels of rugby through to Test level. In Six Nations 2021 there were four red cards for head contact. In the 2022 Six Nations there were only two red cards.

“In the Northern Hemisphere there has been universal support for the head contact process and players have begun to adjust and we are seeing less cards at Test level. It is hoped that the reduction in cards will continue as we go through the “player behaviour change period” and come out the other side. World Rugby and NZR are committed to the continued focus on player safety.”