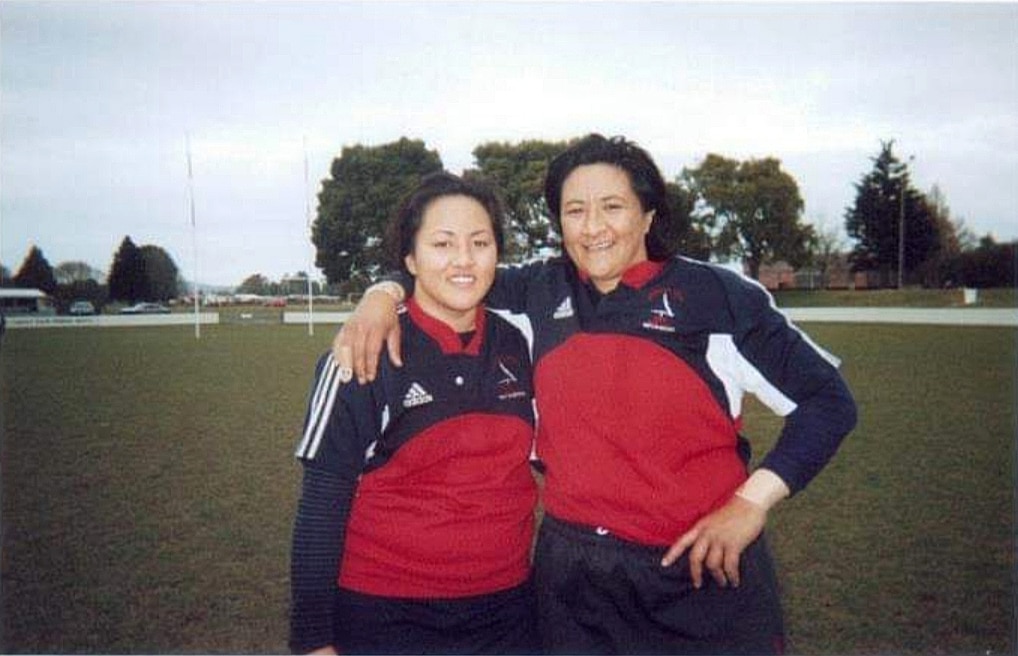 Sheck after a game for Tokoroa’s SURF club with daughter Jaemie.

Campbell Burnes finds a two-time Rugby World Cup winner following her passion of working with at-risk youth, and not yet hanging up the boots for good (from December 21/January 22 issue).

There’s something in the water in Tokoroa.

How does a small, landlocked south Waikato town produce so many sporting champions?

We can reel off Walter Little, Richard Kahui, Quade Cooper and Keven Mealamu, among others, who hail from ‘Toke’.
In women’s rugby, how about Chelsea Alley and Toka Natua of the modern-day crop? And Regina Sheck, who won two Rugby World Cups in the halcyon days of the Black Ferns.

“It’s not just on the sports fields that Tokoroa does well. But you get good support, especially in the team sports. In your down time, you’re always playing sports,” she says.

Sheck, who is of Samoan and Chinese extraction, grew up with the school of hard knocks in her backyard. That happens when you have four older brothers. She grew tough, physically and mentally, but her skills were not neglected. Early forays into soccer and softball ensured that.

While she played rugby at school – Walter Little was a contemporary at intermediate – it was more ad hoc and there were no shop window Black Ferns in the 1980s to draw inspiration from.

After missing selection for the Waikato women’s soccer team, Sheck “spat the dummy” and joined the Putaruru club, which was starting a women’s rugby team. That was the first of her several clubs through the region. She could play first five but much of her early rugby was at No 8. Moving to Auckland, she morphed into a front-rower, settling at Marist. She first played officially for the Black Ferns in 1994 before they even carried that name and held any traction in the wider rugby consciousness.

“I was still learning how to play No 8 and I got told I was in the front-row,” Sheck quips. Scrum doctor Mike ‘Machine’ Casey was a huge help and mentor in learning her craft, where she became adept on either side of the scrum. Scrummaging is about technique but also mindset.

“It’s mindset over your opponent. Even ‘Machine’ would scrum against us. Full credit to him, he made me the rugby player I became.”

In 1998 the Blacks Ferns, still minus that moniker, went to their first official World Cup in Amsterdam. Sheck recalls that “no one gave a shit about us, really”.

But after a 134-6 spanking of Germany in the first match, in which Sheck scored a brace, our old friend Stephen Jones wrote an influential article comparing New Zealand’s skill level to the All Blacks. Interest snowballed as this team carved up all comers. Jones can be acerbic on the All Blacks, but he is a strong advocate for women’s rugby.

Sheck was in Barcelona four years later as coaches Darryl Suasua and Casey signed off in style with another World Cup triumph.

Then followed a difficult period under new coach Jed Rowlands, which Sheck did not enjoy as much. Her last game came in 2004, but she had designs on a 2006 World Cup swansong. Told she did not need to trial as the selectors “knew what she could do”, they omitted her.

It wasn’t the way Sheck wanted to end her international career, but she was not ready to hang up the boots, continuing to play rep rugby, winning an NPC title with the virtually unbeatable Auckland Storm and relishing a season at the USA club Belmont Shore.

In 2010, she even commuted from Tokoroa to Palmerston North to appear for Manawatu. At 42, she played her last game for Waikato. In recent years there have been sporadic appearances at various levels, while moving into coaching, either schoolgirls or young rep or club front-rowers. But she is not going to drill a raw young prop into the ground for the sake of ego.

“For me, it’s all about safety. I would teach the young ones. Hitting the scrum machine is good for your technique and posture, but then you need to do live scrummaging.”

In 2022, she plans to help coach the Papatoetoe club women’s team. Do not discount her strapping on the boots again. She has already twice had the pleasure of playing with her daughter Jaemie at club level, one of the many highlights of her career.

Rugby has given Sheck myriad positive experiences, such as making lifelong friends and visiting exotic destinations around the globe. She loves being a member of the NZ Barbarians club and enjoys putting her hand up to help out in whatever capacity is required. It’s all part of giving back to the game she loves.

But while she is passionate about the Black Ferns’ name, being a former Black Fern does not define her. She is forthright about the current women’s rugby landscape, which is moving into the semi-professional era.

Sheck has concerns about the complacency and lack of mental toughness of some of the country’s top players today, and not just in light of the harsh lessons from last month’s northern tour. The Black Ferns’ game plan has hardly changed since 2017, she feels.

She would love to see more investment in the 15s game and development opportunities at schoolgirl level, which needs attention.

“Good on the Black Ferns for being paid, but then show something for it. We got it sweet. The rugby union still paid for everything. It wasn’t the greatest, but we didn’t have to fork anything out of our pockets,” she says.

“We played, even when we weren’t supposed to sometimes, because we loved the game. Some of the Black Ferns now are told not to or don’t want to play club rugby in case they get hurt. The only way you will get better at rugby is by playing rugby.”

There are many who will agree with her that the amateur Black Ferns from the 1998-2002 era had more talent while still holding down jobs and training twice a day like today’s players.

These days, the former Tokoroa policewoman is the Blue Light co-ordinator for the Manurewa branch in south Auckland.
“The saying for Blue Light is Kids, Cops, Communities, so it’s about breaking down barriers between police and the community, providing programmes so that kids can see police in a different, positive light. The main purpose is to stop our young people becoming victims of crime. Now we run a lot of programmes and it’s all about empowering our youth,” she says.

Specifically, she works with the JAM programme for kids from James Cook HS, Alfriston College and Manurewa HS. Some good results are coming out of these programmes, though in recent months Covid-19 has, as in many areas of life, affected how they deliver.

Sheck runs a tight ship, punctuality and no shortcuts being two of her non-negotiables. That stems from her rugby days.
“Youth is my passion, which is why I get involved with coaching as well. It’s about making them better people, so if they have good boundaries, no matter what they are doing, that’s going to help them in the real world.”

Sheck is no nonsense and speaks her mind, which is not always a feature of those in women’s rugby. But she has earned the right to have a voice and many will agree with her straight shooting.