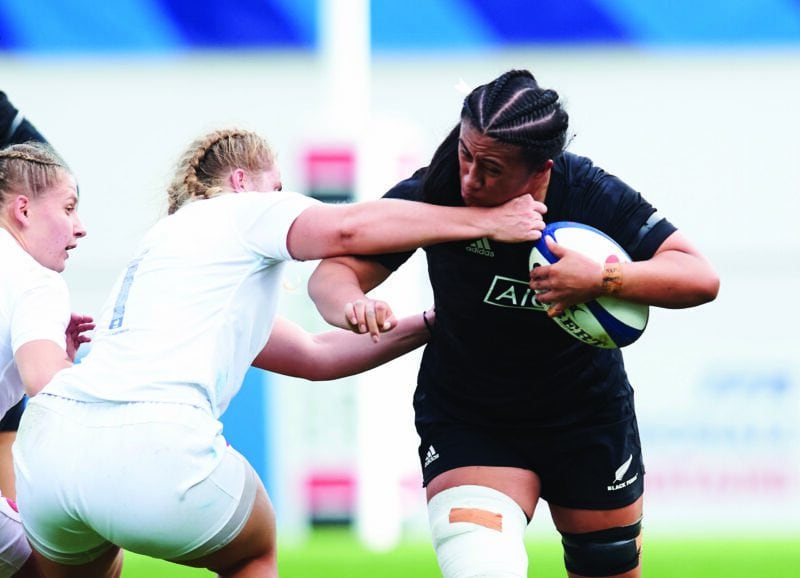 Campbell Burnes analyses the Black Ferns’ northern tour, and concludes that a huge amount of work lies ahead for them to fire when it counts next October and November (from December 21/January 22 issue).

The Black Ferns’ northern tour was a hard watch.

Those hardy souls who rose in the early hours to soak up each of the four Test matches against the two best sides in the world, as it stands, might have been shocked at the gap between them and the Black Ferns. They may have been shocked at the fact that this team, for so long the standard-setter in women’s rugby, was cast aside with contemptuous ease.

They should not have been shocked by the fact that all four Tests were dropped, a run of reverses unprecedented in their three-decades-long history. Aside from the obvious fact that Covid-19 had prevented the Black Ferns playing a Test in 26 months, England and France are involved in professional set-ups and are match-hardened. That is not an excuse for what happened on tour, but it is an important mitigating factor.

What was alarming was not that the Black Ferns looked off the pace, but that their skill level was often poor, especially around their kicking games, they were unable to execute basic lineouts, and they were often soft on defence. As their forwards were getting pounded, they could get very little ball in space to their speedsters Stacey Fluhler, Portia Woodman and Ayesha Leti-I’iga. They have not worked out their best 10-12-13 combination. Is Ruahei Demant the answer at No 10 or is it Patricia Maliepo? Where was Hazel Tubic? If Kelly Brazier’s best position is at 12, where does that leave Chelsea Alley? If Grace Brooker is at centre, does that mean Fluhler will need to operate on the wing?

The Black Ferns will have to accept that, as they morph into semi-professionalism during Super Rugby Aupiki, they are going to come under more scrutiny for their performances as they build towards the Women’s Rugby World Cup, to be held here on these shores (God willing) next spring.

England administered a 43-12 hiding in the first Test in which the Black Ferns lost eight lineout throws. The visitors were better in the second Test, but so was England, and the 56-15 result was hard to swallow.

The expectation was that we would see vast improvement in the first French Test in Pau, but instead France easily clinched its third straight contest with New Zealand, 38-13. Pleasingly, the Black Ferns finally got their act together on defence in the final Test, in Castres, but still went down 29-7. They scored, in all, just seven tries, and conceded 25.

Kendra Cocksedge, for so long the central fulcrum around which the Black Ferns built their game, was off colour for most of the series. But she was not the only one.

The dark clouds gathered long before the Black Ferns flew north. Even a cursory look at the squad identified a green tinge to the forwards, where Charmaine McMenamin, Pia Tapsell (injury), Aroha Savage and Toka Natua (maternity) were out, as was halfback Arihiana Marino-Tauhinu. They were always going to struggle up front against accurate, combative opponents.

While Fluhler and Woodman had their moments, when they could get their hands on the ball, two of the rookies in the pack, lock Maia Roos and loose forward Liana Mikaele-Tu’u, showed real potential. Hooker Georgia Ponsonby took her chance and showed she was adept at set-piece, though prop Krystal Murray was, strangely, only used once off the bench. She deserves to start at loosehead in 2022. No 8 Kennedy Simon showed her abrasive qualities and had a big game against France to close the tour, scoring a try.

Prop Tanya Kalounivale and halfback Iritana Hohaia saw no game time at all.

Head coach Glenn Moore was well into a thorough tour review when Rugby News caught up with him in MIQ. Naturally, he does not see it as all doom and gloom, like many.

“I’m confident we’ll be in a better place come World Cup,” he says, citing issues that also needed ironing out heading into the 2017 WRWC, in which the Black Ferns copped a set-piece pounding from England in the first half of the final before they were able to unleash in the second stanza.

“We certainly need the matches we’ve targeted to have success. You can see what happens when you go 26 months without playing a Test,” Moore says.

On the schedule for 2022 is the May Pac Four series involving the Black Ferns, Australia, Canada and the USA, probably in New Zealand. The North American teams, too, copped hidings from England in November. In August, there will be two Tests for the Laurie O’Reilly Trophy against Australia, and Moore says there are talks under way for another game or two before the World Cup kicks off. At best, there will be seven internationals, plus the March Super Rugby Aupiki. There will be some club rugby and fringe players will need some FPC game time. As ever, there will be several camps throughout the season, but match-play is paramount, as we have seen.

“The character of the group we took away is superb. They worked hard and some of the young ones stood up,” says Moore, who would have had some questions answered, while others remain up in the air.

I counted 12 tries conceded off lineouts, mostly drives. But while England contested Black Ferns’ lineouts, the visitors did not often reciprocate. Stopping a well-set maul legally is a question that keeps up many coaches around the globe. The Black Ferns copped too many penalties, which gave England and France the chance to exploit them there.

“We need to do a lot of work on that. We gave them too many opportunities to set these up. We had some young locks in there who will benefit from that experience. We want to contest lineouts. Typically, we are very strong in that area and in disrupting ball,” Moore says.

He does make the salient point that the mix and match selections on the tour would have been done last year or earlier in 2021 had there been matches to do so. There was also the issue of a chunk of the squad not being able to train properly for several weeks during hard lockdown in Auckland. So while one might question why athletes, many of whom are contracted, are not fully conditioned, that is a mitigating factor.

England, and France conversely, looked as sharp as tacks and played with breadth as well as to their forward strengths.
“They were definitely well conditioned. I don’t think they’ve changed a lot around how they play the game, but they brought an intensity as athletes in a professional competition. England was a well-drilled machine,” Moore says.

Their kicking games were on point and they were able to exploit the Black Ferns on the blindside or through the middle.
Funnily enough, both England and France are in the same pool at the World Cup, meaning the Black Ferns will likely not face one or the other until the semifinals. On this basis, the home team will be third favourites for the World Cup. The players won’t mind that, but they had best train the house down over summer, because the gap is wide and widening.