THE MASTER AND THE APPRENTICE 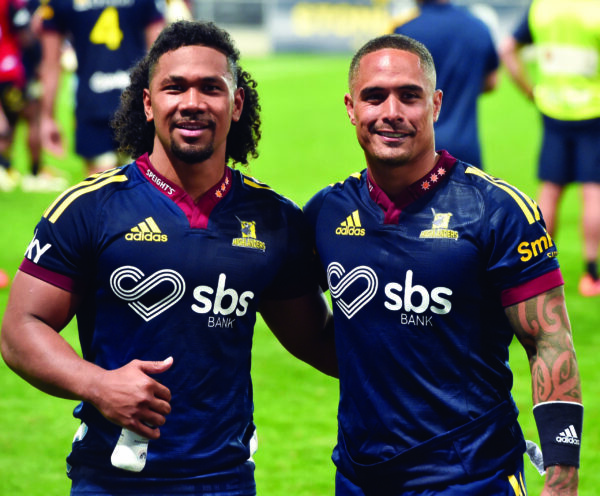 This pair are rivals but good mates and working for the good of the Highlanders ahead of personal ambition. Photo: Peter McIntosh/Otago Daily Times

The demanding halfback role is now a job-sharing position, certainly at Super Rugby and, as Campbell Burnes writes, the Highlanders have a clear succession plan in place for their master and apprentice (pages 10-14 of the current issue).

Internal competition is the bedrock for any team wanting to improve and showcase its depth.

Imagine having two Ferraris in the garage and being faced with the choice of which one to take for a spin first.

This is not a dilemma for Highlanders coach Tony Brown. It is a good choice for him – one of the best halfbacks in the world or one of the top young nines in the country. We might have once said Aaron Smith versus Folau Fakatava, back in the days when you needed a crane to get some No 9s off the field (we’re looking at you, Justin Marshall). Now we just say Smith and Fakatava, an enviable one-two punch in this vital specialist position.

Because, you see, while halfbacks have the engine and energy to go 80 minutes these days, that is no longer sustainable over the marathon that is a Super Rugby season where anything from 14-18 games is the norm. Burnout could easily be a factor if you adhere to a slavish selection policy.

Brown knows this. He is tasked with getting results now and, were that the only factor in his thinking, he would start Smith every week and throw scraps to Fakatava. They call it ‘garbage time’ in basketball. That is ‘here and now’ thinking and ignores the bigger picture. The game is not getting slower or less bruising at Super Rugby level.

You cannot just wind up a player and tell him to go until you say stop. The Crusaders did this with Sam Whitelock in 2017 and he nearly blew a gasket by the end of the season, however strong his displays were earlier that year.

In 2019, when Fakatava, not yet 20, joined the Highlanders fresh from Hawke’s Bay, he was very much the junior, learning the ropes off Smith and Kayne Hammington, himself a very capable, resourceful footballer who now has over 50 Highlanders caps to his name.

Smith started 11 out of 13 games, missing three. Hammington started five of 12. Fakatava was given just three outings off the bench. There were signs of raw promise, but they were not going to fast-track his development by rolling the dice.

In the split 2020 season, Smith started all 13 games, Hammington was used as a sub five times and Fakatava saw action just twice in the No 21 (or 22) jersey.

Maybe that was why he was fresh enough to wow most pundits in the 2020 NPC when he won the Duane Monkley Medal off the back of some irrepressible form for the Magpies....