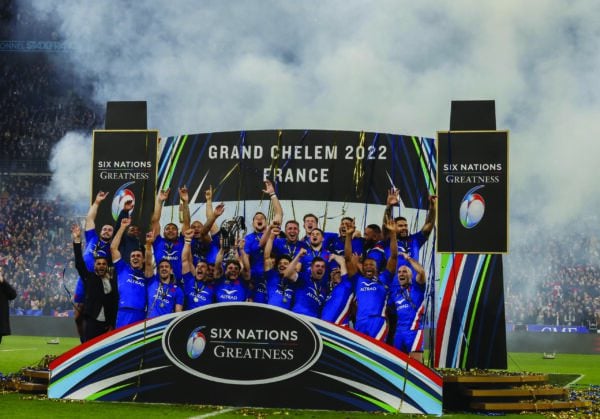 France has won its first Grand Slam in 12 years and there will be more palmares to come.

Jamie Wall tries to get to the essence, with a little help, of why this French team under Fabien Galthie, has become so good and now is firming as early favourite for the 2023 Rugby World Cup on its home soil (pages 24-27 of the current issue).

Think back, if you can bear it, to Paris last November when France demolished the All Blacks.

Romain Ntamack casually strolling along his own dead ball line and then setting off upfield to almost set up a try; Damian Penaud carving up the hapless defence; or the Stade de France crowd reaching volcanic levels of atmosphere.

It came as a dizzying reminder of the iconic – yet painful – French wins: 1994, 1999, 2007. But if that crushing result didn’t convince you this French side is the real deal, then the events of the Six Nations this northern winter surely would have. Les Bleus are now Grand Slam champions a year out from the Rugby World Cup, which will be played on their home turf.

The Gallic flair we knew about all too well. But it has now been matched by the trait that’s seemingly eluded French rugby forever: consistency.

Down here in New Zealand, the view of French rugby, since the 2011 World Cup final, at least, had been that it was a side that showed up here every few years completely disinterested in competing and generally looking forward to getting back on the plane. The French are, famously, the last away side to win a Test at Eden Park, but anyone under the age of 30 is too young to remember that happening. France is more often thought of as a destination for All Blacks when they’ve been dropped (the ones who go out on their own terms end up in Japan) and so the narrative around their domestic league is centred around the fortunes of those players, rather than the actual rugby itself.

With the World Cup being held there next year and the French side now very much the leading force in Test rugby, that view has been shattered as solidly as Fabien Galthié’s side dealt to the All Blacks. So what’s happened over the last few years that’s got France to where it is?

Getting to the bottom of it and through the language barrier requires the help of English speakers immersed in the French game. The answer is a wonderfully French mix of on- and off-field factors, according to Castres-based journalist James Harrington.

“When Galthié took charge, he had an idea in his head that, by the time the World Cup came around, he’d need a side with an average age of 28 and 50 caps’ worth of experience per head to really challenge for the title. That’s been his target. As it stands, injuries and selection issues mean he’ll probably have an average age of 27 and about 35-40 caps per player, so he won’t be far off.”

That long-term planning can be traced back partly to the successful French Under 20s side that was victorious at the last two Junior World Championships in 2018-19, which saw the emergence of star first five Ntamack, but really the bulk of the work has been the development of players through the Top 14 and Pro D2. Often maligned as a self-centred structure that did little to provide for the national programme, the lucrative club system has found itself somewhat forced to do so by government bureaucracy.

“Those internationals from abroad are across French pro and semi-pro rugby but due to recent evolutions in Joueur Issu des Filières de Formation (JIFF, loosely translated as what we know as development players) rules and an increase in them in match-day squads, clubs have had to invest more in their academies and signing French players.”