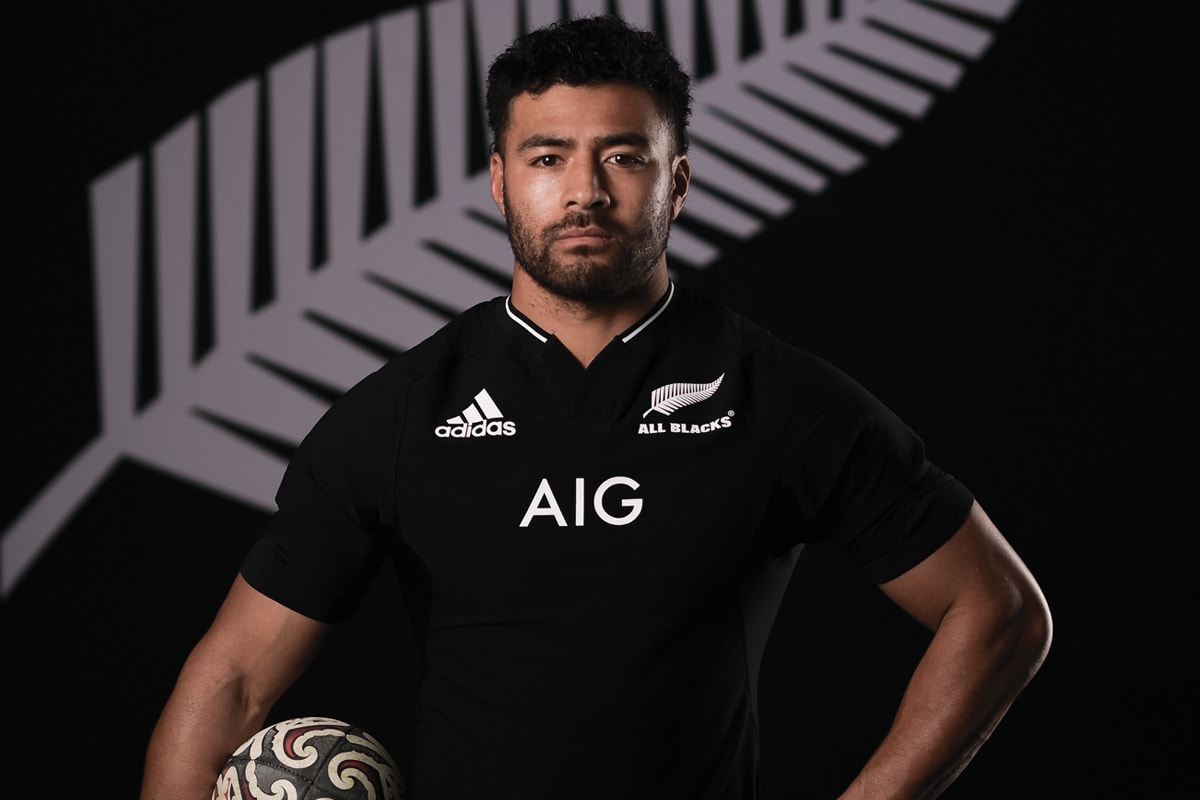 Mo’unga’s best days as an All Black lie ahead.

RRichie Mo’unga is one of the best No 10s on the planet, is respected and admired but, as Campbell Burnes writes, not universally, and that is not entirely his fault.

At some point, Richie Mo’unga will be judged as a great international-class No 10 as opposed to a player who is unreal at Super Rugby level and then inconsistent at the highest level.
He should have almost universal approbation by now, having been the best player in Super Rugby for three of the last four years, and having matured as an All Black in the last two seasons, where he is starting to run the cutter with increasing authority.
Beauden Barrett has his fans, and indeed his rugby in that 2016-18 period often featured play of coruscating brilliance, his pace and ability to break on the outside a huge bonus for a first five. But this article is not seeking to draw endless comparisons between Mo’unga and Barrett. That debate has been done to death. Suffice to say the All Blacks have two prime options for their backline general. This piece is about how good Mo’unga is and how good he could be.
The respect that he deserves may gain traction this month in the north, where the critics are more numerous and often hard-bitten, cynical about the All Blacks and how they play the game.
That said, Mo’unga does have pockets of fans in the north. This from respected analyst Sean Holley in the September issue of the UK’s Rugby World magazine: “The Super Rugby Aotearoa and Trans-Tasman competitions have cemented Mo’unga in the hearts and minds of fans globally. He started in 13 of the 14 games, scoring six tries and 172 points. He beat more defenders than any other player across both competitions. This guy is a serious player. He provides an electric running game and shrewd tactical kicking. His option-taking in launching his backline is superior to Barrett and the individual threat he poses with his acceleration, speed and box of handling and offloading tricks is something to behold.

“He’s also uncompromisingly tough, taking the ball to the line without fear. This he has taken into his defensive game, shoring up the 10 channel,” writes Holley.
“When you analyse Mo’unga, you do so with a smile on your face. He tries things and they invariably come off! He has the ability to tactically change his game. This is why All Blacks coach Ian Foster puts him at the heart of his team.”
High praise, indeed, but largely on the mark from Holley.
The trick, of course, is being able to translate his virtuoso displays into Test rugby on a regular basis, no easy task if your pack is on the back foot, as the All Blacks famously were in the Rugby World Cup semifinal in 2019 versus England or you are struggling to assert yourself in a new-look All Blacks that were uncertain of their game and their selections (the 2020 Tri Nations).
If 2018-19 was the settling-in period as an All Black, then 2020 was going to be the season that Mo’unga started to dominate. He did so in the Sydney 43-5 demolition of Australia with 23 points, including two tries. That was sparkling.
But the litmus test will be how he adjusts to the bigger teams who use rush defence and set-piece muscle to upset the All Blacks’ rhythm. We saw that, emphatically, with the Springboks last month. Mo’unga was given 15 minutes of the final Test, just four days out of quarantine. Naturally he struggled, his pack well on the back foot. Perhaps he needed to adjust his alignment. Bear in mind, too, that he is not playing with Aaron Smith, who gives his 10s extra time and space to get on the outside of his markers or marauding loose forwards.
In the north, Mo’unga should be up against the seasoned Johnny Sexton, Ireland’s new centurion, a skilled allround operator but a man who has sadly failed to always handle the pressure moments in Test rugby, specifically at World Cups. Joey Carbery is waiting in the wings for his time to shine.
France will look to two younger men who could be the answer to their historic revolving door policy at No 10 – Romain Ntamack and Mathieu Jalibert. That duo should be coming nicely to the boil in two years’ time at a home World Cup.
Former All Blacks second five Lee Stensness, who could also slot seamlessly in at 10, is a fan of Mo’unga and believes his time as a world-class backline general will come.
“Richie is very much a natural 10 where he can operate in those confined spaces and close to the advantage line. He is comfortable right up in the opposition’s face,” Stensness says.
“His flair is evident at Super Rugby level and against the lesser nations. I’d like to see him get more time against the South Africas, Englands and Frances of this world, just because it’s a totally different ball game. We know he’s got the skills. I don’t want to see more of him getting moved around, so he can get au fait with those top-level Test matches.”
It’s clearly not Mo’unga’s fault that he has not, prior to this tour, faced top tier one nations other than Australia and Argentina since the World Cup.
This season he was MVP against Fiji in Hamilton, pulling all the right strings, and then was the standout in Bledisloe I at Eden Park, splitting the game open with a break to set up the decisive try to Sevu Reece. Oh, and he scored 18 points. He was even more dominant in Bledisloe II, using the wind to good effect with his tactical kicking.
Critics tended to forget these high notes after Beauden Barrett uncorked a marvellous reverse pass against the Pumas in September.
Aaron Smith has seen first-hand the growing maturity of Mo’unga in the All Blacks over the last year.
“Test level is different to Super in the sense that errors are more costly. Richie has the ability to create the magic moments out of nothing. You can look for trends but you cannot predict that in Test rugby. Some of the things he’s able to do he’s bringing to Test level now. It changes games and momentum and can win you games. He understands Test rugby now,” says Smith who, like Mo’unga, missed a chunk of the international season.
That X-factor Smith talks about conjures up two images in my mind of Mo’unga, both from Super Rugby.
How many first fives have you seen regain the ball from a kickoff at halfway? Just the one? That would be Mo’unga’s heads-up play in a key period against the Blues in Christchurch in 2020. He fired in a low kickoff, roared into the gap and scooped up the ball to give the Crusaders unassailable momentum. It was instinctive and intuitive, the sort of audacious play that Carlos Spencer could pull off in his Blues pomp circa 2003.
The second incident came earlier this season at Eden Park. Again, it was Crusaders versus Blues. Mo’unga scored 28 points in a mesmerising display, but the ease with which he identified a mismatch with one of the Blues’ tight forwards was a delight. There was a shimmy and a waltz in for a try. It was almost in slow motion but it was a sweet piece of deception.

Mo’unga is actually a more complete No 10 than Spencer, and this scribe believes he has the potential to be the best ever All Blacks first five after another Crusader, Daniel Carter. He will have to re-sign with NZR to make that happen, his current deal expiring at the end of 2022. But if he plays for the All Blacks until he is 33, as Carter did, he could potentially rack up close to 100 Tests, which Barrett will do on this tour. By then we will have a clearer idea where Mo’unga sits in the pantheon of great All Blacks No 10s.
It will be interesting to see who regularly plays outside of Mo’unga in the All Blacks No 12 jersey. Clearly, he works well with David Havili, and the latter has, on the whole acquitted himself well in 2021, but how much will we miss Ngani Laumape’s ability to crunch over the gain line and take pressure off his No 10? Carter had Ma’a Nonu in that role. In the tight Tests against the big guns, who will provide that midfield thrust?
“If we select the wings I’d like to see, which would be Caleb Clarke and Rieko Ioane, they have the size to help get us over the advantage line better, rather than, say, Havili or Anton Lienert-Brown. But in the midfield we are possibly lacking a big bopper like a Nonu or Peter Umaga-Jensen. Our strengths, though, are still trying to get the ball wide,” says Stensness.
“Aaron Smith, when he comes back, will give Richie more game time and I don’t think we’ll be behind the advantage line like we were against South Africa.”
Mo’unga’s passing game is an asset. He is swift, long and accurate off either hand.
“Some of Beaudy’s passing is not particularly advantageous for the rest of the backline. It’s sometimes behind the player,” adds Stensness.
“Richie too has quicker feet in the smaller space, whereas Beaudy has that top-end pace we all know about.”
More time in the saddle is Stensness’s solution to unlocking Mo’unga’s full potential as an All Black.
“He’s had comparisons his whole career, following Mehrtens and Carter into the Crusaders where those two are all-time favourites. His Super Rugby form is undeniable and surely it’s a matter of time in the top Tests for him to transfer that form more consistently. It’s a different pace and level of physicality.”
He believes that it might not be a bad idea to allow Jordie Barrett, after his heroics in the Rugby Championship, to continue with the kicking tee on this tour to allow Mo’unga to further free up.
So where does Mo’unga sit in the global No 10 ranks, some two years out from RWC 2023?
Well, we had a look and there is, funnily enough, no standout player that we can say, unequivocally, is the best in the world right now.

We have touched on Ireland and France.
England has a job deciding between Owen Farrell, George Ford and the young comer Marcus Smith, a protege of Nick Evans at Harlequins. Farrell tackles like a bazooka and kicks like a metronome. He is a 10 but he is more use to England at 12, so Ford can unleash his outsides.
Dan Biggar of Wales is a fine goalkicker and won the nod for the Lions in South Africa, but is he a better allround player than either Callum Sheedy or Gareth Anscombe?
Finn Russell is probably the best running 10 in the north, but he’s had his issues with Scotland coach Gregor Townsend in the past.
Nicolas Sanchez played like Hugo Porta against the All Blacks in the shock win last year, but he is not the man. The form of Handre Pollard of South Africa has gone backwards in the last 2-3 years, stymied by injury, but he reminds me of Geoff Boycott, all the shots but unwilling to use them regularly. Elton Jantjies is pushing him hard.
The Wallabies have invested heavily in Noah Lolesio. He came up trumps against France in July, but crumbled against the All Blacks. Quade Cooper and James O’Connor are more mature players now, but can they spark the promising Wallaby outside backs in the big Tests, such as against the All Blacks?
“There’s lots of guys performing at a good level, but no one is really dominating. Mo’unga has all the skills and potential to be that,” says Stensness.
So now it’s just time in the saddle for the man who could be the world’s best No 10.