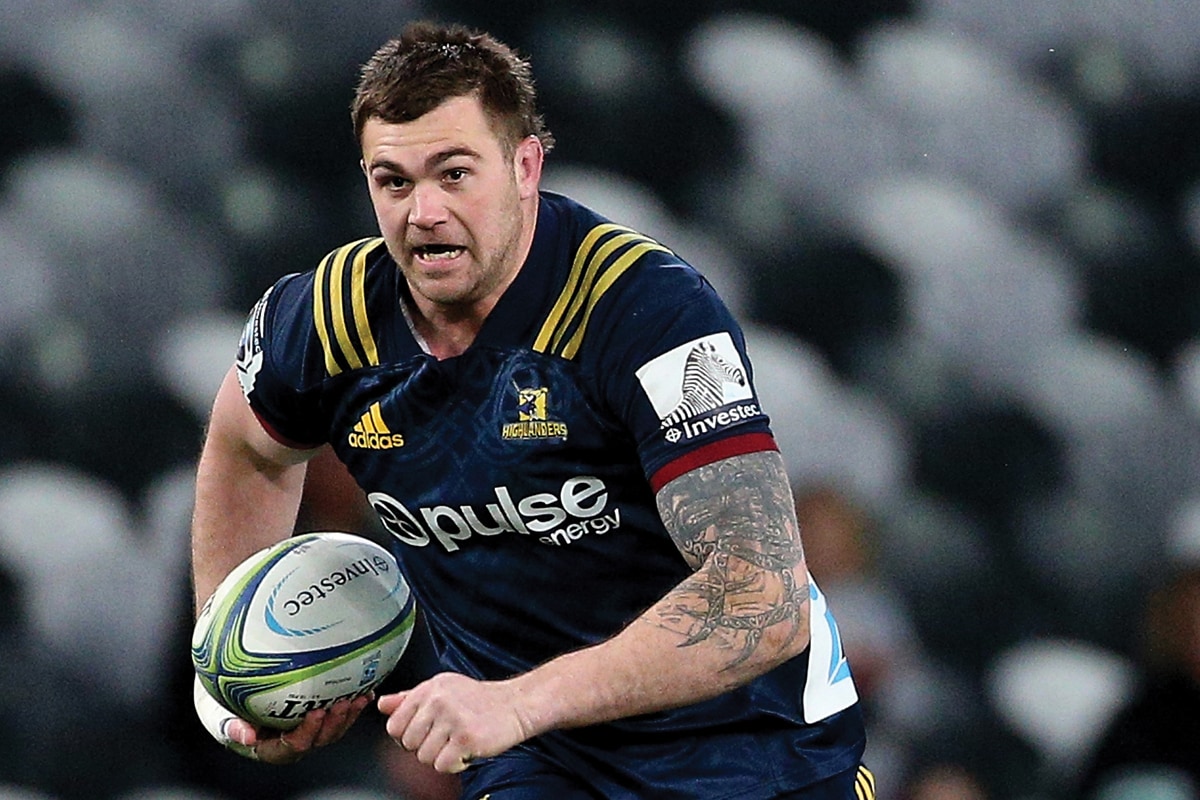 Highlanders fans will hope to see Squire again carrying the ball with venom.

Campbell Burnes caught up with a 2016-19 Highlander who is back and hungry to add ballast to a side full of potential.

Liam Squire is back at the Highlanders and in a much better space physically and mentally than when he left the franchise after the 2019 season.
Back then, his body was broken and his mind fragile. The former was due to a chronic, niggly hip. The latter we are not entirely sure why, but Squire did take the almost unprecedented step at the time of withdrawing from consideration for selection for the All Blacks. He said, tantalisingly, that he was not ready physically or mentally for Test rugby. That followed just three, useful, games for the Highlanders.
Brad Thorn was cited as a precedent in 2001, but Thorn withdrew after being selected for the men in black.
Since late 2019, Squire has played a handful of games for Japanese club NTT Docomo Red Hurricanes, alongside the likes of Marty Banks, Keepa Mewett and Lincoln McClutchie. But Covid-19 cut short that first season and then the second year of his contract was terminated by mutual agreement.
He was back in New Zealand in March for knee surgery. The healing time was going to be 10 months, so he thought it prudent to also clean up his hip, which was suffering from wear and tear, not helped by his bruising approach to the game. That operation was done in June.
“I wasn’t looking to come back to the Highlanders, but I wasn’t going to be fit for the start of the Japanese season, which was starting earlier. I was going to miss three-quarters of the season, so I came to an agreement with the Hurricanes,” he says.
Highlanders coach Tony Brown set up a meeting to gauge Squire’s intentions.
“He was keen to come back and get back to playing his best footy and make his way back into the All Blacks,” says Brown.
Squire himself would concur with the first part of that statement but is not wanting to put the horse before the cart when it comes to the All Blacks. He is just happy that the timing worked out well with his old franchise and he can add value to the team, while adding to his 33 Highlanders caps.
“Hindsight is a great thing, but I wish I’d got the hip done a lot sooner. It’s been really refreshing to get that done. The body feels a lot better and I can do more training on it too,” says the 29-year-old.
That doesn’t mean he is going to temper his rugged style of play. Far from it.
“I don’t think I’m going to change it too much, to be fair. I enjoy my style. It has its risks – it’s a risk-reward thing – but you won’t see too much of a difference.”
Squire took a semi-cautious approach to his training in January, but was hoping to be right for round one against the Crusaders and, fingers crossed, at full noise by March-April.
The All Blacks are not at front and centre of his mind.
“It would be great, but I just want to play well for the Highlanders first and foremost and then re-evaluate where I’m at and what I want to achieve. A lot of things have changed in that All Blacks environment. I’ll make a decision if it’s for me, but I’m not putting too much pressure on myself to make that team,” he says.
A wise stance.
At the time of writing, he had yet to ink a Mitre 10 Cup deal, but confirmed he would not be back at the Tasman Mako. He has a two-year Highlanders contract.
He wasn’t going to enlighten us on what went down in 2019, but is happy to bring us up to speed with where he’s at now.
“I left things on a note I wasn’t too happy with. The stuff going public didn’t sit well with me at the start. I wasn’t comfortable with that. I’m not someone who openly talks to the public. You have to have your private life. You can’t be an open book all the time.
“I’ve done a lot of work behind the scenes with some people and getting a good balance of what I need to perform on the field and putting myself first. I’m not going to say I’m absolutely perfect, but I feel I’ve got a good handle on what I need to do.”
Funnily enough, while the All Blacks badly missed Squire in 2019, the Highlanders did not miss him terribly in 2020. Shannon Frizell was on top of his form in the No 6 jersey and Marino Mikaele-Tu’u came of age as a fulltime pro at No 8.

In Squire’s absence, the All Blacks had to reshape their loose forward thinking and were still tinkering in the Rugby World Cup semifinal. Now they have added Akira Ioane and Hoskins Sotutu to their mix.
In 2021, the Highlanders are loaded in the loosies, so Squire may have to wear the No 20 jersey on occasion, if not six or eight. Japanese international Kazuki Himeno is waiting for his chance, as are Teariki Ben-Nicholas and Sione Misiloi.
Squire is unfazed by this competition. He’ll suit up where he’s required. He trusts the coaches, labelling them “one of the better coaching groups I’ve been a part of at the Highlanders.” He is also well ensconced in his lifestyle block just out of town, ideal for one who likes his hunting and solitude.
“Coming into this year, I feel like a new player, just getting the vibe, we’ve got a really good balance of young and old and a good vision of where this team wants to go. Browny and all the staff have done well in giving us an idea of what this team can achieve. It’s up to us players, but we all want to work hard for each other.”
Sounds like just the right place for a career refresh, because there is much more to come in the rugby life of Liam Squire.