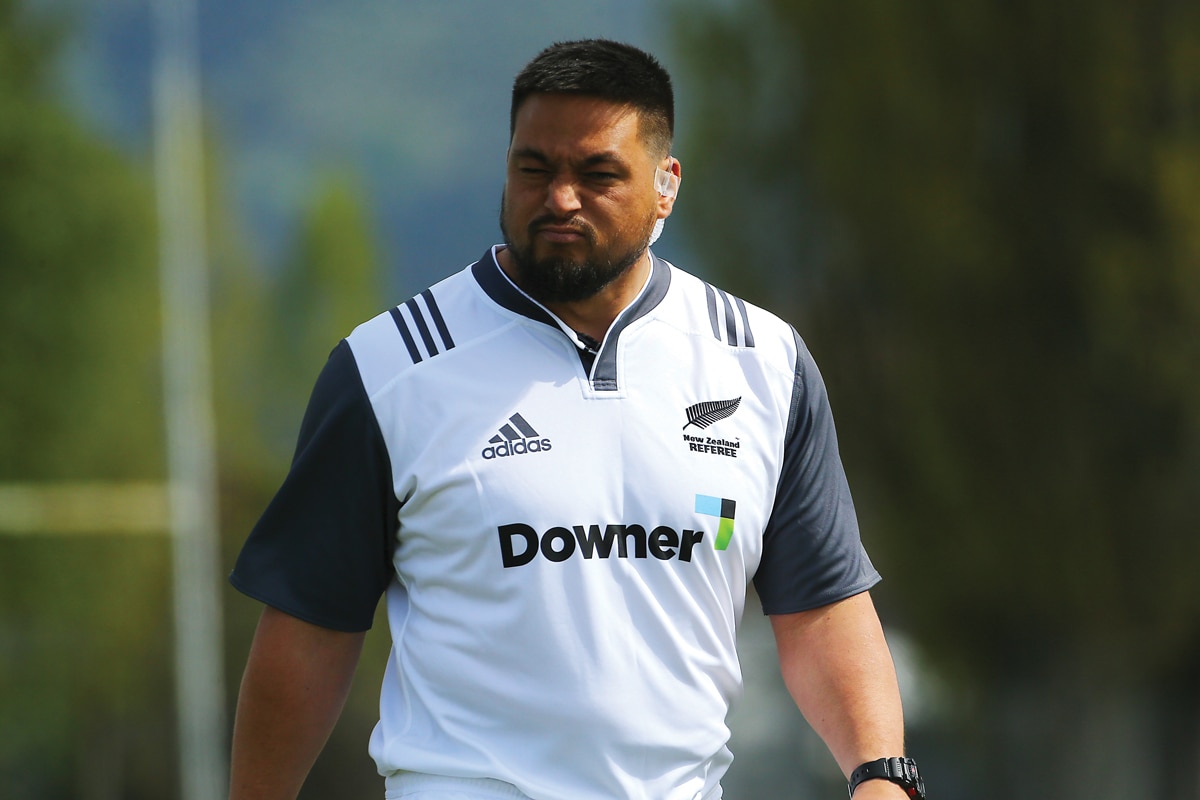 Campbell Burnes catches up with a promising referee, coach and TV comments man, who happens to be a former All Black.

We know about Kane Hames the prop and TV comments man, but we don’t know a lot about Kane Hames the referee and coach.
The 32-year-old former All Blacks loosehead has been to dark places battling concussion symptoms – he hasn’t laced a boot to play in three years – but he loves the game so much that he’s exercised other options to stay involved. We’ll get to the reffing and coaching soon enough.
He’s always been his own man, not someone to lapse into ‘rugby speak’ or to toe the establishment line. Even as an All Black rookie, he called out a senior rugby writer on his views. Not many others would have the wherewithal to do that in a press conference.
For the last year you will have heard him, often at Mako matches, offering his thoughts as the comments man for SKY TV. He’s been like a breath of fresh air, not just imparting knowledge on what’s happening in the scrums, but giving articulate insight, infused with humour, into the pictures he’s seeing.
“It’s about creating a picture over the top of the picture we’re seeing. That makes sense to me,” says Hames.
Veteran broadcaster Tony Johnson gave him the impetus to have a crack at this industry, where too often ill-qualified former players find a cushy number where they have little to say and are fearful of even remotely calling it like it is.
“I’m so glad that I’ve got to work alongside TJ because he’s got so much experience. I’ve been able to understand the role much quicker,” says Hames.

There must be something about front-rowers, because James Parsons, still an active player, but another who is battling concussion symptoms, is also making a decent fist of the TV gig. Ben Castle is the other front-rower used by SKY.
“I try not to be negative, but I don’t mind pointing out if someone has made three mistakes. What I cannot stand is when commentators glorify someone getting bumped off or hit hard in a tackle,” says Hames.
“It’s an American thing where disrespect is openly talked about. Rugby is not about that.”
Hames reckons he finds himself ‘coaching’ on TV and he loves it. It’s not preaching, but offering an expert view. And he’s the best man to talk about scrums on TV since the passing of John Drake in 2008.
“Every time it comes to talking about scrums, it’s a joke. They don’t know what’s happening, so they don’t talk about it. It’s actually one of the easier sides to understand and it’s such a big facet. I call it the ‘push’ part of our game,” Hames says.
“The famous people in New Zealand rugby are the ‘carry’ guys, not the kickers, passers and pushers.”
He doesn’t mind talking about the pushers, so we’ll quiz him on the loosehead depth in this country. If we say Joe Moody is the undisputed No 1, followed by Karl Tu’inukuafe, Alex Hodgman and George Bower, judging by the All Blacks rankings, who is next in line?
“Joe Moody is definitely our best by far, but that’s the issue. Daniel Lienert-Brown would be next in line (after that quartet). He’s been close in the past and is going well. Does he deserve to join his brother in the black jersey? Probably. He scrums very well,” says Hames.
“Mike Cron talks about tightheads being the ‘special people.’ They’re the ones who get paid the most. I used to put it on myself as a loosehead to make these special people look less special. That was my mindset.
“Do we have looseheads embarrassing Nepo Laulala every week? No. Daniel Lienert-Brown embarrassed Angus Ta’avao (in the Canterbury v Auckland game). Does that happen often? No.”
Of course, it might have been Hames in that current loosehead mix were it not for the ugly sceptre of concussion. Even now, it holds him back from living life to the full.
“I still get a ton of symptoms. I can’t do a full set of training, so I’m still trying to work through it all. The more I do, the worse I feel, whether that’s work or training, even walking. It’s just a big fightback to get to where I was before I finished playing.”
But in 2018-19, still contracted to the Chiefs, he still hoped to make a comeback. It wasn’t to be, and now he knows the best he can hope for is a Golden Oldies game in a few years if the cloud parts.
That said, Hames doesn’t pull the curtains and shut out the world when the darkness falls. He clearly seeks to find the tenuous balance between training enough to keep his fitness up and not overdoing it as he keeps his hand in refereeing.
He has not just taken up the whistle or the flag to stay active during 2018-20. He has, in fact, been a registered referee since his teens, and at one point in his mid-20s saw that as a more viable pathway than professional rugby. This season he has acted as assistant referee at both Mitre 10 Cup and Farah Palmer Cup levels. So watch for him wearing the Downer-sponsored top and carrying the whistle in the next couple of years. It could happen.
“I started refereeing at Super Rugby and Mitre 10 Cup level, as I was often reffing when playing. I’ve already reffed at the highest level,” he jokes. Some front-rowers do often give the referee plenty of helpful advice. Drake himself was the master.
Not that Hames, a rare ref who played in the front-row, has been sought after to school up young referees on the intricacies of the scrum. That needs to change.
Certainly, Hames wants to be a good, allround referee, not just one who knows which player is cheating when the packs engage. He reckons losing weight will help. He dropped 13kg this season just from eating better, and wants to be under 100 by kickoff season 2021. But he is bucking the trend of inside backs, such as Dan Waenga and Nic Berry, who take up the whistle.
The thing is, though, Hames is more than happy, in his TV work, to explain why a bookend was hingeing, or run a tight ship on his ‘crouch, bind, set’ call sequence, but when it comes to his coaching, he DOES NOT want to be pigeonholed as a scrum doctor.
This is a man, after all, who wants to be a head coach. What do they know of coaching who only scrums know, to paraphrase the famous CLR James phrase on cricket?
“I’m annoyed that front-rowers just get chucked into scrum coaching roles, so I purposely wanted to stay away from that. It’s an easy box to put us in,” he says.
Instead he was the defence coach for the Nelson College First XV, where he helps out with the international students.
Hames still has ambitions in rugby. Now he has more options in the game.