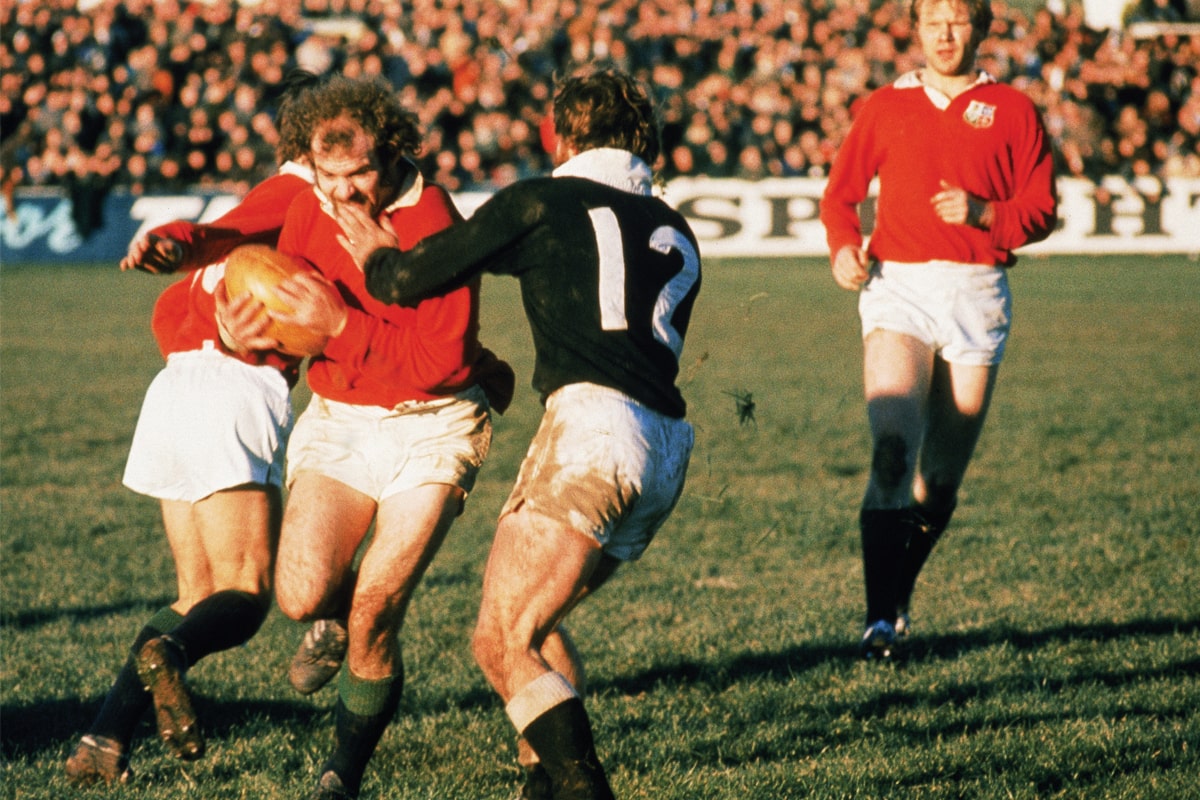 Carwyn James ignored overtures to not pick John Taylor, with ball, for his stance against the 1969 Springboks tour to Britain.

Phil Gifford has his own take on the legacy of the 1971 Lions, who left these shores 50 years ago as just the third touring team to win a Test series here over the All Blacks.

Carwyn James, the gifted, hugely likeable Lions coach in 1971, was also a brilliantly silver-tongued public relations man, who burnished the team’s reputation with wonderfully crafted quotes.
“From the age of six,” he’d say, “the All Blacks played the same pattern, rigid and predictable. They love the perspiration, but are not all that impressed by the inspiration. They never really understood (first five) Barry John. He was a being from another planet.”
There is no question in my mind that James was the best coach to bring a touring team to New Zealand.
What he did with the Lions was sheer genius, as making them the most schizoid team we’ve ever seen baffled and confounded the All Blacks, and, in many ways, the whole country.
On the one hand you had the Lions who thrashed Waikato 35-14 and then Wellington 47-9, in the third and fifth games, to establish themselves as a thrilling force in international rugby, apparently determined to use the brilliance of a superstar backline to win their matches.
They certainly had some brilliant backs, from JPR Williams, a tough, hard-running fullback, through to Gareth Edwards, the dynamic halfback. We’ll get to first five Barry John soon, but the best player in the team was Irish centre Mike Gibson.
Gibson was on his second Lions tour here, having suffered through the mediocre 1966 visit. When Bill McLaren, the great BBC commentator, retired, he said Gibson was “the most complete, all-round footballer I’ve ever seen. He had a nose for a score. If there was a score going, you could bet your bottom dollar CMH Gibson would be on the end of it. Although he looked skinny, he tackled like the crack of doom. It has to be him for his efficiency, tacticianship, the ability to tell good ball from bad, great hands and ability to punt onto a sixpence if he had to.”
I say amen to that.

Add in fliers on the wing like Gerald Davies and David Duckham, and it’s easy to see how the myth, carefully nurtured by coach James and the British media, arose that this was a team that treasured attack above all else.
Having been on various press benches throughout the tour and watched the other games on delayed broadcast, I can, hand on heart, say that’s nonsense.
James had worked out that after the disappointing tour of South Africa in 1970, the All Blacks were vulnerable in the forwards, not the backs.
Colin Meads was made captain of New Zealand after Brian Lochore retired, and Meads would say, in his later years, that the captaincy basically handcuffed him. A Meads who worried about offending Test referees wasn’t what the All Blacks needed. The depth in the forwards was so shallow that when Peter Whiting was injured, Lochore was frantically called in 24 hours before the third Test in Wellington to lock, out of position, the scrum with Meads.
(The move wasn’t successful, but it did lead to the greatest words any rugby-loving Kiwi male ever wrote. Lochore’s wife Pam was in town, so he left a note on the kitchen table of their Wairarapa farm house. “Gone to Wellington to play Test. Back on Sunday.”)
Against a shaky All Blacks pack, James was able to field a terrific eight, with all-time greats like Merv ‘the Swerve’ Davies at No 8, and Willie John McBride at lock.
These were tough, shrewd veterans, able to foot it at every level, from scrum to lineout to breakdown. Tane Norton played the first four of 27 successive Tests for New Zealand against the ’71 Lions, and he says their scrummaging was so powerful that at times he found it hard to lift his foot.
How serious James was about getting the best forwards he could field was reflected in the fact, not reported at the time, that James was under pressure to not select Welsh opensider John Taylor, easily the best in the British Isles. Why? Because at least one of the stiff-necked officials of the Home unions considered Taylor a communist because he’d refused to play against an apartheid-era Springboks team in Britain in 1969.
In his own life, James was no stranger to pressure.
I met him once in ’71 when Roy Williams (who was covering the tour for the Auckland Star) and I sat down for a coffee with James at the Royal International Hotel in Victoria Street.
I don’t remember a lot of what James said, but I do remember thinking at the time he must be either very intense, or very nervous. His fingernails were chewed to the quick, and nicotine had stained his cigarette-holding fingers a deep, deep shade of ochre.
What most of us didn’t know then was that he was struggling with his sexuality at a time when, although homosexual relationships had been legal in Britain for four years, rugby was still staunchly butch, and massively homophobic. A Welsh society where referee Nigel Owens and Welsh captain Gareth Thomas would be celebrated for coming out was four decades away. (Smoking up to 50 cigarettes a day and becoming a very heavy drinker wrecked James’ health, and he tragically died alone, undiscovered for several days, in an Amsterdam hotel room in 1983, at just 53 years old.)
If James was a mystery wrapped inside an enigma, with one biographer suggesting he withdrew an application to coach Wales after the Lions tour because he hated the spotlight that shone on him after the Lions’ historic series victory, just as mysterious to me is the idea, now largely accepted as fact, that the ’71 Lions played a brand of ‘inspirational’ attacking rugby.
For me that was belied by my own memories of seeing the games at the time, and by the statistical fact the All Blacks scored eight tries in the four-Test series to the Lions’ six.
Now we get to Barry John, a hugely gifted kicker, and, when the opposition defence wasn’t too flash, a good runner too.
Before the last Lions arrived here in 2017, I steeled myself and grimly watched, notebook in hand, a DVD of all 80 minutes of the last Test of the 1971 series, a 14-all draw that gave the Lions, already ahead 2-1, the series.
You be the judge. In the first half, although John did pass eight times, while kicking seven times, the ball did not make it once to the Lions’ wings. Mike Gibson – or fellow centre, captain John Dawes – did the kicking if John didn’t. In the second half, John got the ball nine times. He kicked every single time. That’s nine kicks, zero passes.
As they say in the classics, inspirational attacking rugby my butt.
But the best team to make a full tour of New Zealand in the last 50 years? Without question. In fact, the history books show you have to go back to the victorious 1937 Springboks to find a team to truly compare to the ’71 Lions.
A Welsh journalist, Alun Gibbard, who wrote a fascinating biography of Carwyn James in 2017, says: “I don’t think that rugby was the main pillar of his life but that literature was. He was a man of books, a man of literature, who had the heart and soul of a poet.”
There’s no reason to disagree with Gibbard’s assessment. He spoke to James’ family and a large number of his friends for his book Into the Wind.
But there’s no law that says a poet can’t be hard-minded too. What made the Lions of ’71 a great team – the first, and so far only, Lions team to win a series here – was a coach who knew where the side’s strength lay, and had the courage to play to that strength.