PLAYING FOR YOUR MATES 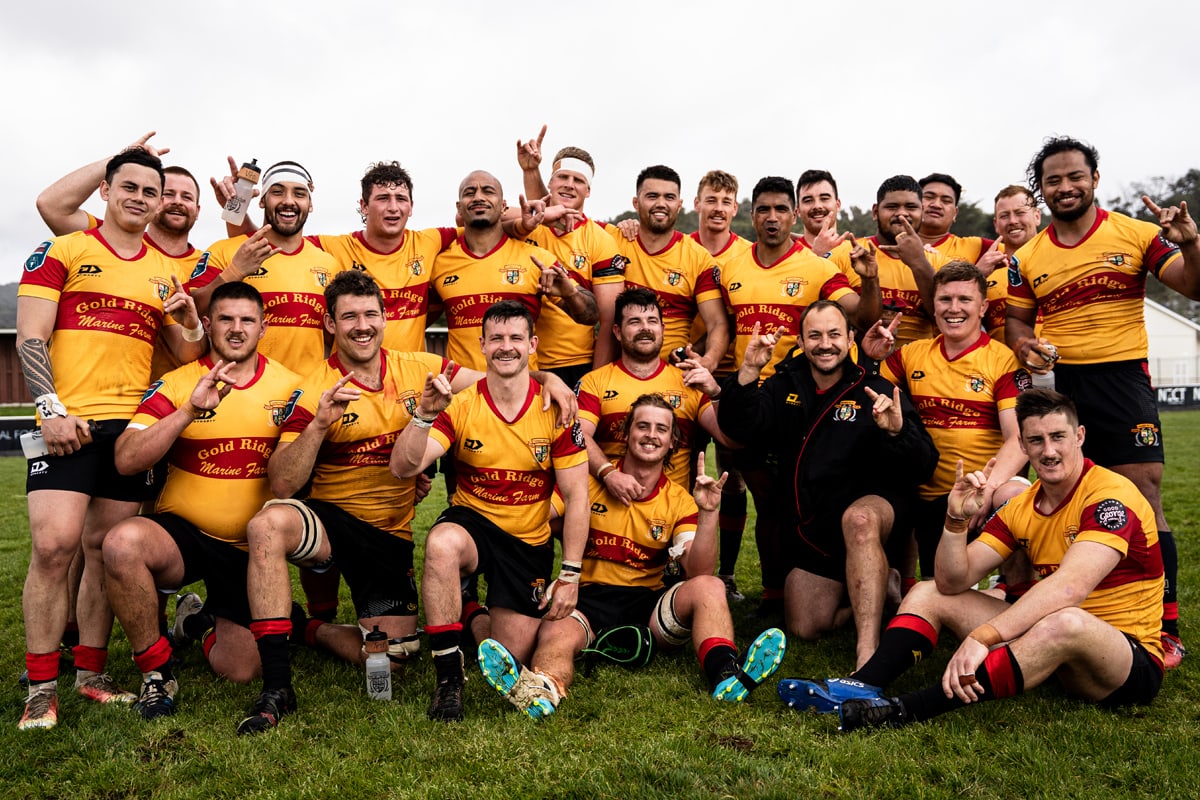 Steve Hale discovers what has changed for the better with Thames Valley’s Swamp Foxes.

Since 2018, the Swamp Foxes have undergone a renaissance.
After winning NPC third division titles in 1988, 1990 and 1995, it took a further 23 years before the Thames Valley handle was etched onto any silverware. Winning the Meads Cup in 2018 was treated initially as a fairytale, an aberration, a one-off.
The Swamp Foxes backed this result up 12 months later by topping the Heartland Championship and earning a home semifinal. While deciding not to participate last season seemed inexplicable, at the time of writing the Swamp Foxes were unbeaten in 2021. So how have the perennial strugglers become Heartland Championship titans?
I remember former Auckland and Southland NPC wing Watisoni Lotawa, who also played three seasons for North Otago, telling me how playing Thames Valley in Paeroa was regarded as an easy weekend away for the Old Golds, a guaranteed five points in the kitty.
The province has endured forgettable seasons, a revolving door of coaches and CEOs, loan players of varying quality, even a few who forgot to turn up for home games. Too many players were unfit, depth was an ongoing issue and off-field exploits surpassed performance.
The contrast between then and now could not be greater. The current squad is young, lean, energetic, happy and super-fit.
External indicators are fantastic: the Foxes’ social media campaign on Instagram is outstanding, while the team is finally outfitted in eye-catching apparel.
Matt Bartleet, mastermind of the 2018 Meads Cup side, is an excellent sounding board, a man who selflessly stepped down as head coach, in a calculated succession plan, allowing assistants, David Harrison and Joe Murray, to take the wheel.
Along with Matt Rolston, they form a powerful quartet. All four represented Thames Valley at Heartland level, Bartleet 15 times at prop.
A deep thinker with an innate ability to understand people, the personable Bartleet has been the catalyst for Thames Valley’s changing fortunes.
“Looking back,” he reflects candidly, “there was probably a lack of alignment between what some previous coaches were trying to achieve and where the collective playing group were at. The ambition or understanding didn’t match up.
“I started to think about creating a story for success, in reality it’s a sales pitch, you have to pitch your story and I had to make sure I knew all the answers. I sought out David Harrison and Joe Murray, two experienced Swamp Foxes, both with huge mana in the union. What they may have lacked in coaching credentials they made up for in authenticity.”
Bartleet set about creating a blueprint that players would embrace after a long day’s work. It had to be fun. He did his homework, actively seeking players who would enhance the new culture. Bartleet realised the devil is in the detail, understanding that change isn’t derived by chance.
“It’s really cool seeing the players so emotional about receiving their jerseys now and being so proud about who they represent. I always thought that would happen in time as our environment developed. A lot of the growth now is player-driven, which is such a powerful driver. But it’s not my team anymore,” Bartleet graciously acknowledges. “Harry and Joe are the coaches.”
Hit hard by Covid-19, at one point nearly half the squad were affected by lockdowns and unavailable for selection. It would have been easy to make excuses; instead, the Valley found solutions. The commitment to keep the campaign on track has been nothing short of incredible.
“We have had players move away from families to be with us and former players making themselves available,” reveals Rolston, known to all and sundry as ‘Crane’.
2018 Meads Cup tighthead, 160kg Siti Tupou, even made the trip from his new home in Dunedin to Greymouth, when the team had a propping crisis prior to the West Coast game last month. And new recruits from within the union’s boundaries have been blooded ahead of schedule, including young Waihi prop Sefo Moniati, who made his debut recently. The support for Moniati from the squad was immense.
“Each week we talk about being what it means to be the ultimate ‘Swamp Fox Man’ and name one of the boys living those values,” explains Rolston. “It’s similar to the Waikato ‘Mooloo Man’ or the ‘Crusader’ and has become a big driver. We want the guys to always enhance and add to our jersey. We even sing together before training and when I say sing, I mean with everything we have. If you can sing your heart out in front of your mates, you will also dig deep when the chips are down.”

Thames Valley’s extended management team even includes a sports chaplain who travels with the side. No stone has been left unturned. Feeding the team correctly also became a priority.
“We eat properly and the guys sit down together and bond which is so important,” says Rolston. “In the past when I was a player we might all go to the Macca’s drive thru after training. Not only was the quality pretty average, but we missed an opportunity to spend more time getting to know each other.
“The Valley jersey used to be worth 10 points to the opposition before a game even kicked off,” he reveals. “Now it’s worth 10 points to us. When we hand out jerseys to players pre-match, there are often tears. It means so much now for this group. That hasn’t always been the case. At times in the past, the third half was as important as the performance.
“Now we are fielding enquiries from quality players who like what we are about and want to be a part of this. It’s the good buggers we look for, the players prepared to go the extra mile.
“During lockdown, the squad stayed tight with Zoom yoga sessions. Who would ever have thought a Thames Valley team would embrace yoga? The shape of the team has definitely changed and a lot of that has been driven by senior players setting those standards and expectations. We have guys sharing workouts and programmes that Super Rugby players are doing.”
Rookie prop Trinity McQueen is an example of the new breed. Despite living in Mercury Bay, 140km from the Swamp Foxes’ base in Te Aroha, the young loosehead travelled to both Chiefs U20 and Bay of Plenty squad training sessions during the summer months, his dedication rewarded with NZ Barbarians U20 selection.
“We ask the guys to put family first and work second. Then us,” says Rolston. “If a player is unable to attend a session, he lets us know and we work around it. We trust them and don’t conduct a witch hunt.”
Attendance at training is at an all-time high. The players can’t wait to get there and see their mates.
Thames Valley trainings are by no means conventional affairs, the squad having already trained with pineapples and enjoyed water balloon fights this season. Players and management can be found playing competitive rounds of handball in their motel car park hours before kickoff.
Current captain Connor McVerry is Thames Valley’s Brad Thorn. Although not the biggest forward in the Heartland Championship, McVerry is as tough as teak, capable of starting big matches at openside, blindside and lock. Debuting for the Swamp Foxes in 2015, McVerry is perfectly placed to describe changes to the environment.
“It’s hard to put a finger on it, the feeling in this squad is different to any other I have been involved with. It’s hard to explain, but you feel comfortable just being yourself. There are no egos. A lot of that started with Matt Bartleet, he’s a funny man, he plays the fool well, people feel happy around him.
“There has been a big change in the squad’s attitude overall since I started playing for the Valley. This group is self-motivated, self-driven and not prepared to settle for less. We now have guys who are always trying to do what’s best for the team, which hasn’t always been the case. New guys are coming into the team now and performing straight away, which is also a credit to the current level of our club rugby.”
Another addition to the Swamp Foxes’ wider group this season is Dwayne Sweeney, the former Waikato captain and centurion, Chief, NZ 7s rep and Maori All Black. No stranger to high performance environments, what does Sweeney make of Thames Valley’s culture?
“The Heartland Championship is tough; it’s an amateur competition, requiring professional execution,” Sweeney explains. “You have players from Mercury Bay all working fulltime then travelling to Te Aroha twice a week for training, driving to Hamilton airport on Friday and flying to Gisborne. Then on the day of the game, the team has to bus from Gisborne to Ruatoria and are expected to perform. Professional teams don’t have those demands.
“What I love about Thames Valley is the environment focuses on the person, not the athlete. People come first here. The guys work hard but there is also a lot of fun at training. When you’re in a good group, you don’t want to let anyone down. You don’t want to skip training in case you miss out on the fun or the chance to see your mates. Nobody wants to miss out.
“And when the chips are down on Saturday, you dig a little bit deeper, you bust a gut to cover or make a tackle that your mate missed. And the result, the win, is really just a by-product of those friendships. You’re doing it for your mates. My wife can tell when I’m really enjoying my rugby. You stay at training a little longer, or you have that extra beer at the clubrooms. Nobody wants to leave.”
The final word goes to Bartleet: “Rugby often gets a bad rap, doesn’t it?” he confides rhetorically. “You have 20 young guys out after a game on the booze and sometimes things can happen. How do you tell young men how to behave? We talk about how other people might see us. Are we being good people, how do we make others feel? How do we want to be remembered? Let the players take responsibility. There is nothing better than being part of a good team, achieving and sharing experiences together.”
The future of Thames Valley Rugby seems in safe hands.