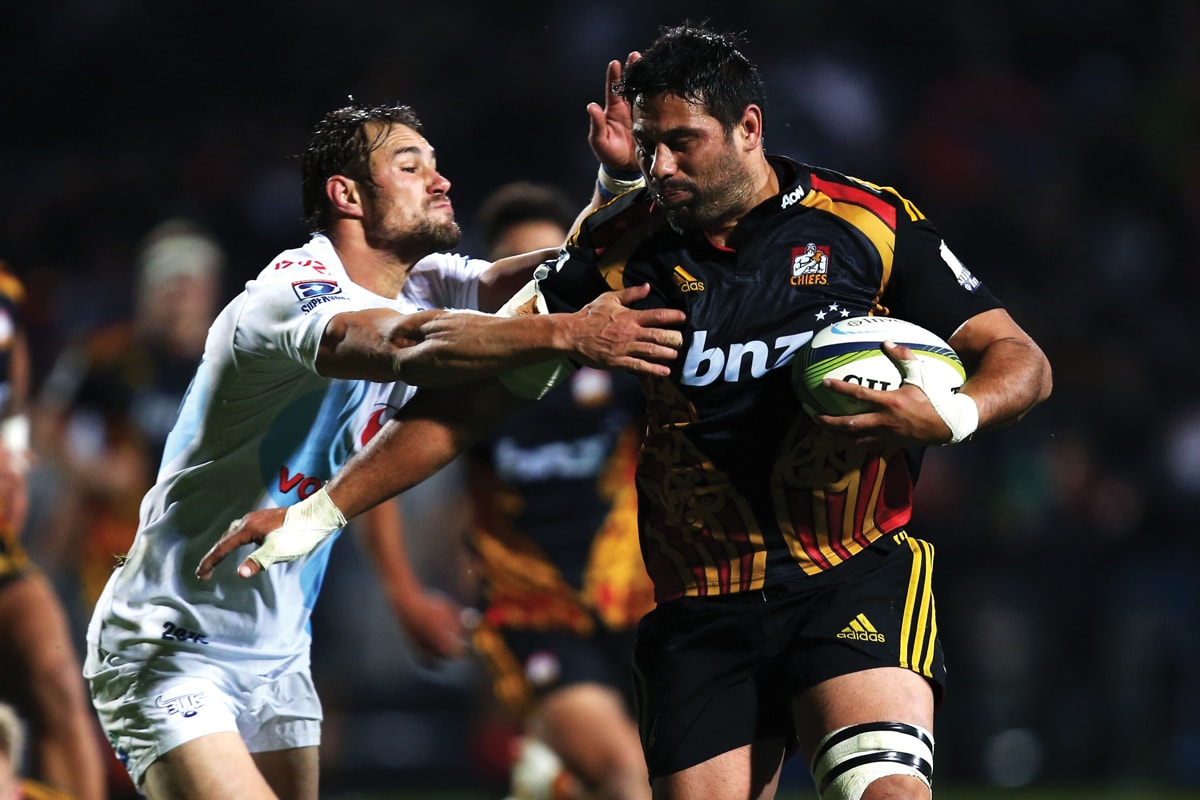 Ross Filipo’s second to last game for the Chiefs, in 2015 against the Bulls, was one of his best.

Michael Pulman caught up with a gutsy, engaging character of the game, Ross ‘Floss’ Filipo, who is less than three years retired.

Working hard is a given in rugby, but Ross Filipo always wanted to be a ‘good bastard’ about it.
Humble, laidback, keen to enjoy a laugh or two, and working hard to serve the community. That’s life now for the former All Blacks lock who many say did it all in his career.
Settled in the Waikato, a region Filipo has called home base since 2013, the now 41-year-old spends his days at the Waikato Rugby Union, working as a rugby development officer. That entails working daily with coaches and players at a community level while also keeping a foot on the high performance side to identify and develop new talent as part of being assistant coach for Waikato in the Mitre 10 Cup.
The community level of the game is an area of immense passion for Filipo and he has seen the dire state of affairs at the grassroots.
Participation rates are dropping consistently year on year and many local clubs are struggling to stay afloat financially, with oversaturation of the wider game being just one of the drivers frustrating Filipo
“I think we’ve saturated the market for too long,” Filipo says. “There is too much rugby and it runs for too long throughout the year. I would really like to see a set-up where there is only a window of a number of months per year and rugby operates within its season.”
On the field, Filipo was a force to be reckoned with. Standing 2m tall, versatile and physically imposing, fittingly known now as one of the best big men of his time, Filipo captured four Super Rugby titles, three of which came as part of that great Crusaders side of the mid-2000s, and one with the Chiefs in the latter part of a career that would ultimately conclude in the Waikato.
“A lot of people involved in the game here are very humble,” Filipo says of the region. “There is a real community sense that has that little town feel where the community is very evident within the operation of all aspects in the rugby environment.”
Rugby taught Filipo many things, but two of the biggest lessons handed down by some of the great coaches, and developed alongside some of the great players to ever pull on a jersey, are approaching life with the commitment of working hard and being a good bastard about it.
It was a value that Filipo sought to bring to every team he ever played for, but nobody did it quite like the Crusaders.
“I always felt that the Crusaders were quite a number of years ahead of other franchises in New Zealand in terms of delivering a programme in that way,” Filipo says of his time in Canterbury, the most successful point in his career.
All Blacks selection came in 2007 but it wasn’t until a year later that Filipo felt he had truly earned the right to wear the black jersey, and it was on the end of year tour that year when Filipo achieved a personal highlight, playing at Murrayfield against the Scots.
It was right around the time when the All Blacks were undergoing something of a culture shift. Players were encouraged to step away from being the strong and silent type, in favour of being open and vulnerable. A new philosophy of what it meant to be an All Black had emerged, and Filipo was in the thick of it.
“It really showed me the direction that the team was going to go and that I needed to go in that direction as well. I knew I was never going to be a hundred-Test All Black, but knowing that you’ve stood in the same room as a lot of legends and people that you’ve admired as well as learning about the responsibility you have to both the jersey and the New Zealand public made me very proud.”
Time in the All Blacks was short, confirmed when then assistant coach Steve Hansen asked Filipo to toughen up future prospect Isaac Ross.
Moving on from the All Blacks made way to finally saying yes to some lucrative overseas offers. Life in France with Bayonne wasn’t easy for the Filipos first time round, and after a much more enjoyable season in England with Wasps, it was well past time to return home.
“I struggled with the language barrier and found it difficult to get into much flow,” says Filipo of his first stint offshore. “The Northern Hemisphere style of rugby was so different to what I had been used to so coaches were getting annoyed because I wasn’t performing”.

Returning to New Zealand, initially with Wellington in the Mitre 10 Cup and then as a part of the Chiefs’ title-winning side in 2013, the love of rugby was back and Filipo was headed for a fitting finale to a great career.
Then came 2015, and a moment in time that would ultimately lead to one of the defining memories for Ross Filipo, the rugby player. The story, now famous among rugby circles in the Waikato, starts with pizza and beer in hand.
Now semi-retired, Filipo watched from his couch as the Chiefs’ mounting injury crisis tore apart the locking department in 2015. When a fresh-faced Michael Allardice became the latest casualty, Filipo didn’t think anything of it until a text message from then Chiefs assistant Tom Coventry would set off a chain of events that would result in Filipo being signed by eventual French Top 14 champions Racing-Metro.
“I hadn’t been doing anything and had barely been to the gym properly in months when Tom (Coventry) called me to ask if I would come into training just to make up numbers,” Filipo says.
Two days later, he was laced up and on site at Chiefs HQ to go through the very first lineout drills of the week. Then, the back gave way almost immediately.
“On the second jump I felt my back click when I came down,” recalls Filipo. “I was sweating when I left training and went to pick up my daughter from a friend’s house and spent the next three hours lying on the floor with my legs up to try and keep my back straight.”
Keeping the injury secret from coaches and trainers, not wanting to let the Chiefs down and spare a bit of personal embarrassment, Filipo carefully navigated himself through the week’s training, but being named to start against the Bulls hadn’t been part of the plan.
The back had started to improve, and Filipo had successfully kept his woes secret. One final session on the watt bike, for a decent sweat-out if nothing else, allowed Filipo to determine whether the body could pull through.
“I woke up on game day and the nerves kicked in because I knew what was coming and I knew that I had done no proper physical preparation towards it so I literally decided it was going to be a mental game because the body was going to shut down and you’d have to shut yourself off from the struggle and keep going”.
It ended in what Filipo calls one of his best performances for the Chiefs, who would go on to beat the Bulls.
“That one was a real Test of my mental toughness and being able to take on that challenge of fronting mentally without doing anything physically. It was pleasing from the aspect of being able to tell your body that it’s got something to do regardless of how much it’s hurting.”
And yes, Filipo did come clean to his coaches and teammates after the game. It’s a beauty of a story, and fitting of a man who truly gave it all to the game he loves over the course of what was a great era of rugby.