New All Black hopes to inspire others 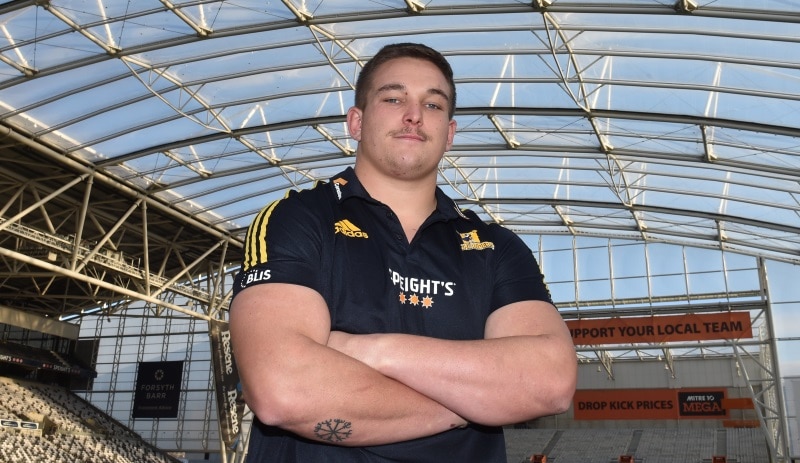 He has one tattooed just below his right elbow. But newly-minted All Black Ethan de Groot is no snowflake.

The 22-year-old Southlander was one of four newcomers named in the national squad on Monday.

The burly loosehead has forced his was in to the top team, thanks to a standout season for the Highlanders this year.

He runs hard, he tackles hard and he works hard.

And that kind of physicality gets you noticed.

It is a dream come true for the quiet Southlander, but sleep did not come easy after he learned of his promotion on Monday night.

"Any kid in New Zealand wants to be an All Black that plays footy, so I just can’t believe it has happened," he said.

His phone was set to vibrate and it kept buzzing for hours after the news.

Well-wishers were very keen to pass on their congratulations to the humble young man.

Some of his staunchest supporters are a little divided, though.

"The old Staggie [Southland Stags] supporters are happy and they are sad. They are happy that they’ve got an All Black from the region and also sad that I won’t be stripping in the maroon and gold this year."

De Groot grew up in Gore and honed his skills at Southland Boys’ High School.

He looked up to Otago and All Black Carl Hayman and, of course, fellow Southlander Jamie "Whopper" McIntosh.

"I’d like to think I have inspired parents and kids to stay in Southland and do their schooling in Southland, because there is a pathway.

"It is tough, because you are not in the limelight, but it can be done.

"Hopefully, I’ve inspired some people to stick to their roots."

The 127kg bookend credits his rise to the Highlanders coaching staff and fellow front-rowers such as Daniel Lienert-Brown and Josh Hohneck, who helped him master the art of scrummaging.

And with consistent game time, he has flourished.

Close observers will have noted de Groot barely misses a tackle and his mobility has improved immensely.

He also runs some strong lines and scored a brace of tries against the Waratahs.

"I sort of knew I was maybe in the picture when Feeky [All Blacks scrum coach Greg Feek] came down and we spoke about scrumming and that. But I never thought I’d make the initial squad."

The All Blacks open their season against Tonga at Mt Smart Stadium on July 3. The following week they play Fiji at Forsyth Barr Stadium.

What an occasion that will be for de Groot, should he get out on the field.