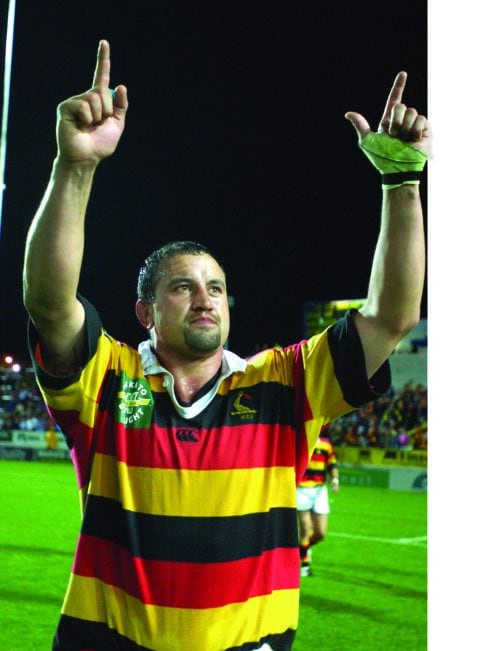 Campbell Burnes chews the fat with Deon Muir, a fine No 8 from the first 13 years of the pro era (pages 78-81 of the current issue).

Deon Muir was the embodiment of Mooloo mana from 1995-2002 in over a century of games in the red, yellow and black.

He brought commitment to the jersey, and that of the Chiefs and Māori All Blacks. There is no doubt that, if he had been handed an All Blacks jersey, he would not have disgraced that either. Put it this way, less talented and less committed players have appeared for the All Blacks.

He’s now 48 and is still involved at the coalface of rugby, coaching the Rangiuru club premiers in Bay of Plenty. He runs fishing and diving tours off Maketu in the western Bay. He knows all the best spots for his clients at Muirs Tours.

Muir has an annual catch-up with old Waikato or Chiefs mates such as Scott McLeod, Rhys Duggan, the Marsh twins, David Briggs, Dustin Watts, Jason Kupa and Wayne McEntee. They play some golf or go fishing, and have a few cold ones, old friends shooting the breeze.

The death of Joeli Vidiri, who was the same age as Muir, heightened the importance of these gatherings.

“We were having a few beers when the news of Joeli’s passing came through. We were just stunned, hard on the heels of Inga’s death,” says Muir.

“That’s why we catch up when we do with mates, even though we’re all busy.”

Living in the moment and enjoying what you have is the message.

Muir did not play with Vidiri but remembers him as a dangerous foe, no more so than in the famous 1997 NPC semifinal in Hamilton.

“It was hard enough dealing with the Marsh twins at Counties, let alone Joeli and Jonah. We had the game in the bag, and then Joeli had 10 minutes of brilliance in which he won the game by himself. It was amazing to watch, but then he could pull anything out of the hat. He was such a humble guy, just a top man,” says Muir.

Muir and Yours Truly met twice on the rugby field, in the 1991 Counties v Auckland Schools clash in Matamata and in the 1994 Waikato v Auckland Colts game in Hamilton. The ledger was shared 1-1. But even then you could see he was a leader in any group.

Though born and raised in the Bay, he did his secondary schooling at St Stephen’s, the now defunct Māori boys’ school on the side of the Bombay Hills. Even time one drives over the Bombays, there is a quick glance at the sad, decaying buildings that once housed one of the great rugby schools. Muir played for the First XV there in its last great era, before issues such as finance and bullying led to its closure in 2000.

But there is talk of a reopening, and Muir would love to see that.

“It was a big part of my rugby career, giving me discipline and direction in how I trained. I’ve got lifelong mates from that First XV and that rugby was one of the highlights of my career.

“We punched above our weight. All our games were traditionals against some big schools.”

Muir was back in Bay of Plenty in 1992-93 before Lindsay Berryman of the Te Awamutu Sports club persuaded him to make Waikato his home. That led to Waikato Colts selection under John Boe. The latter was then promoted to the senior job and Muir found himself in the Mooloos, stepping into the big shoes of retired No 8 John Mitchell and straight into a gnarly pack that had reached the pinnacle of the provincial game, winning the NPC and Ranfurly Shield in 1992-93.

“Making that team meant that I was able to learn a lot off those guys. It was an uncompromising forward pack. I was a Māori boy from the Bay amongst all those farmers, but I just loved it and couldn’t get enough of it.”....