FROM THE BIZARRE TO THE SUBLIME 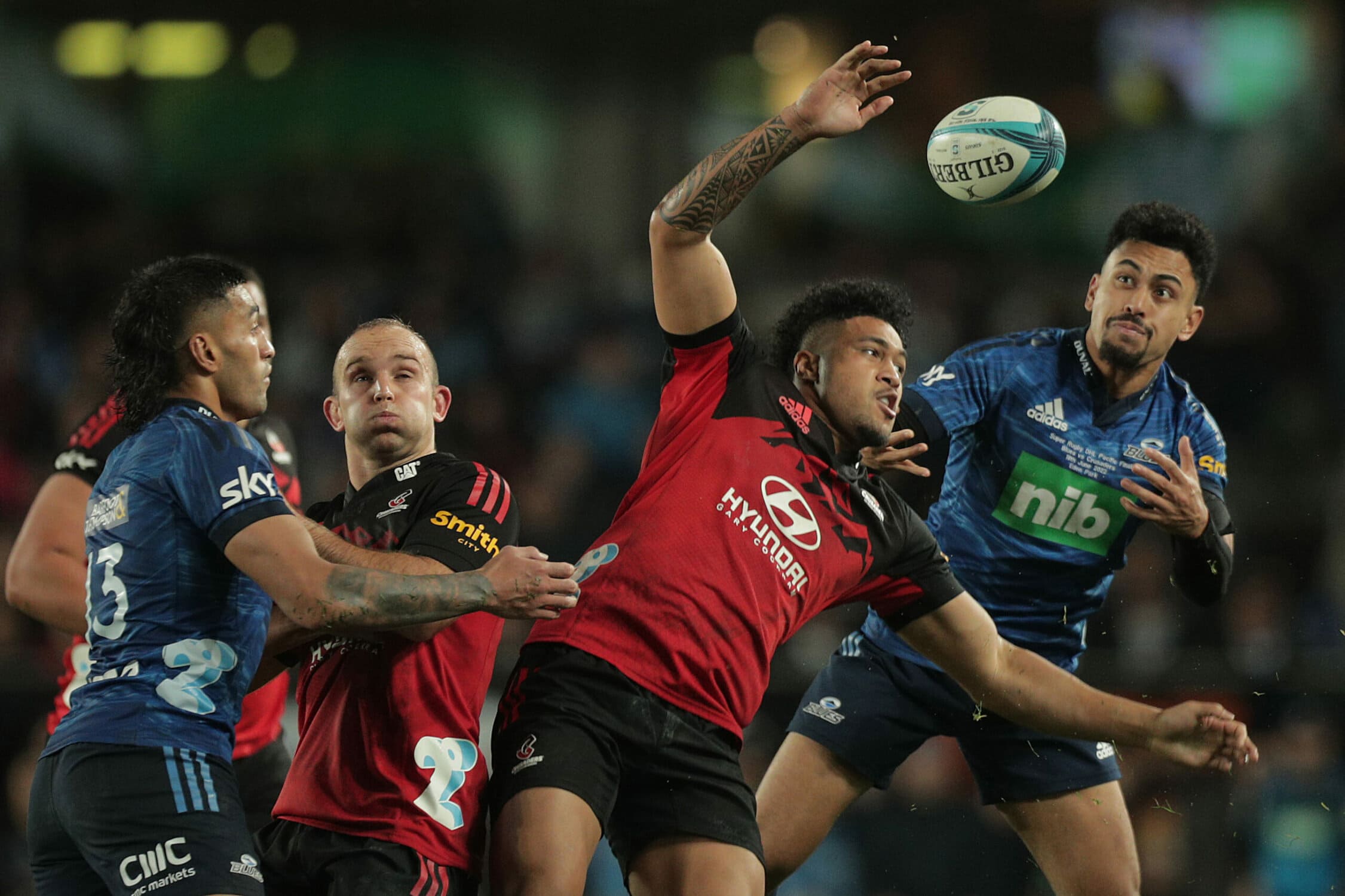 It started in a summer haze under a large Covid-19 cloud with Pita-Gus Sowakula hurdling Aaron Smith for a try on a dusty ground that did not look fit for purpose. It ended on a cold, wet, winter’s night with a Crusaders’ tactical masterclass before more than 40,000 fans at the Garden of Eden.

It’s my job to make sense of all the stuff that went on in between during the inaugural season of Super Rugby Pacific, with a focus on the New Zealand sides. Two new teams made the start line – the Fijian Drua, based out of Australia, and Moana Pasifika, based out of Auckland. But the startling thing was that there were 12 wins by Australian teams, including the Drua, over Kiwi sides. Compare that to just two (out of 25) wins in the 2021 Super Rugby Trans-Tasman competition. That was the big plus for the 2022 comp, which really only sprang into life once Covid settled down and the trans-Tasman borders opened in April.

Some of the footy from February to April was a hard watch. Crowds were restricted, atmospheres were subdued. Some of the rugby, in New Zealand in particular, was not bad, with several All Blacks hitting the ground running and the derbies full of feeling. But players were in and out and roster sizes blew out. The Hurricanes used nine (!) hookers and 50 players, can you believe? Not one player amongst the six NZ teams appeared in every game for his franchise during the season.

Covid hit most sides badly. Later it was the flu. The public struggled to know who was coming and going, especially as the franchises, maybe acting on an edict from on high, refused to let the stakeholders know who was stricken with Covid. There was no stigma to getting the virus and every player I spoke in 2022 to was happy to say whether they had contracted the virus or not.

Other competitions and sports had no issues with being open. If nothing else, a more open approach might have allowed some players to be cut some slack from media when they were returning from Covid. Mind you, the Chiefs, missing 17 men, did not need much slack when they put 59 on Moana Pasifika in March.

The Blues were consistently the best team on show after the Hurricanes edged them in their opener. They reeled off a franchise record 15 straight victories to top the log and guarantee a much-needed financial boost of three home playoffs games. Their 534 points was a season record and they presented a compelling mix of forward power and X-factor in the backline.

It made them unstoppable in a clutch of games and saw them home, impressively, against the Chiefs in Hamilton (25-0) and the Crusaders in Christchurch (27-23), breaking an 18-year hoodoo. Luke Romano and Roger Tuivasa-Sheck proved inspired signings, the former fronting in the lineouts and mauls and bringing all his winning attitude. RTS was good value on attack, but admits he is still working on other aspects of second five play.

Beauden Barrett played very well for the most part, and formed an interesting attacking threat with Stephen Perofeta on phase play. Perofeta’s 129 points were a competition high. Finlay Christie and Rieko Ioane were other standouts in the backs. The Blues did most of the damage up front, where Hoskins Sotutu and Dalton Papalii were in fine form, often in combination with Tom Robinson, who later shifted to lock and gave a man of the match display in the semifinal against the Brumbies.

Ofa Tuungafasi was probably the best tighthead prop until the playoffs, when he was given some real heat by Ethan de Groot and Tamaiti Williams. Kurt Eklund, too, was the best hooker throughout the comp until things turned nightmarish in the final. The Blues will be gutted at failing to clear the last hurdle, but they should be better for it in 2023 under the coaching staff led by Leon MacDonald. Many were prematurely willing to write off the Crusaders for some dusty form in April, where they even lost to the Waratahs.

But the 13-time champs are no slouches under pressure, extending their home playoffs win record to a scarcely believable 27-0. Their back three of Will Jordan, Sevu Reece and Leicester Faingaanuku scored 30 tries between them at an even 10 apiece. Many so-called pundits wrote off Richie Mo’unga and Sam Whitelock, both of whom came up trumps when it counted.

In fact, they both played consistently throughout the season. Cullen Grace and Oli Jager shone in the pack and the former was unlucky to miss the All Blacks. Tom Christie was Super Rugby’s tackling machine, making 246 of them in 2022. The final saw the Crusaders attack the Blues’ lineout, which disintegrated so badly – nine throws lost – that the 21-7 scoreline was flattering to the home side. The front-row aimed up too. Scott Robertson has now won six of the available seven titles since 2017. They are still the kings of this level.

The Chiefs may have fancied themselves as kings and they looked in fine fettle through much of the season. But they blew it in the semifinal, despite forcing the Crusaders to make a remarkable 222 tackles. Clayton McMillan’s men had some under-rated performers such as Brad Weber, Luke Jacobson and Alex Nankivell, but they would have given much to have Josh Ioane fit for the entire campaign, While Bryn Gatland developed his allround game, he made several curious, costly, kicking errors.

Ioane’s display against the Hurricanes in Wellington was the best by a No 10 in the regular season. No 8 Pita-Gus Sowakula was a powerhouse on attack, having his best season, but time will tell whether he is an international-class loose forward. Brodie Retallick’s season was punctuated by a broken thumb but he, Tupou Vaa’i and Josh Lord all played well at lock.

The Chiefs were solid most of the season in the front-row and there was reward for Aidan Ross with his promotion to the All Blacks. The startling thing about the Hurricanes was that Jordie Barrett led all offloaders after playing half of his 12 games in the midfield. Ardie Savea continued to run as hard at the end of games as he did at the start, while Josh Moorby was the big mover, scoring nine tries in 10 games at wing or fullback. But they never really dominated enough in the pack to threaten the semifinals.

The Highlanders were clearly the eighth best team, despite moans about the gulf between their points tally, with a 4-10 record, and that of the seventh-placed Reds. De Groot and Marino Mikaele-Tu’u were the pack standouts, while Folau Fakatava, after earlier trying to do too much, became an effective sub at the 55-60 minute mark.

Mitch Hunt never recaptured his best form and it looked like Sam Gilbert might ignite the backline after his outing against the Force until injury struck. Once more, the Highlanders had no luck with their back three, injuries and lack of form hitting hard. New head coach Clarke Dermody will need to sort pronto some new recruits in that area.

So to Moana Pasifika. If you were not overjoyed to see them win their first game (on golden point), then you were either a Hurricanes fan or possessed of a stone heart. Never has a new team faced so many obstacles, from assembling too late, out of necessity, to copping a bad rap from the match officials at times, hammered by Covid and the Chiefs, and having no less than three ‘storm weeks,’ the new entity did it tough.

They ran through 47 players, some of whom were not up to it. But they all knew who they were playing for and the spirit shown for them to finish by beating the top Australian side, the Brumbies, was commendable. They were in several games until ill-discipline, unstable lineout drive defence and pushed passes reared their ugly heads. They will be kicking themselves that they did not finish at least 10th or 11th.

They were good enough to place higher on the log. All things considered, Moana Pasifika were more competitive than many were prepared to grant them. So expect better in 2023. We can surely expect better from Super Rugby Pacific allround in 2023. The Australian teams are more competitive and many, therefore, including Dave Rennie, will be cringing at the comments by Rugby Australia’s chairman Hamish McLennan that all bets are off after 2023 as to what Super Rugby may look like.

Super Rugby is far from perfect. Indeed, just a few years ago it lacked integrity on its points table. But it now has two viable, exciting new teams and looks to be the way to go in a post-Covid rugby world. Maybe just drop the quarter-finals. Hell, then it might look like the 1996-2005 version of Super Rugby, the best we’ve had so far.