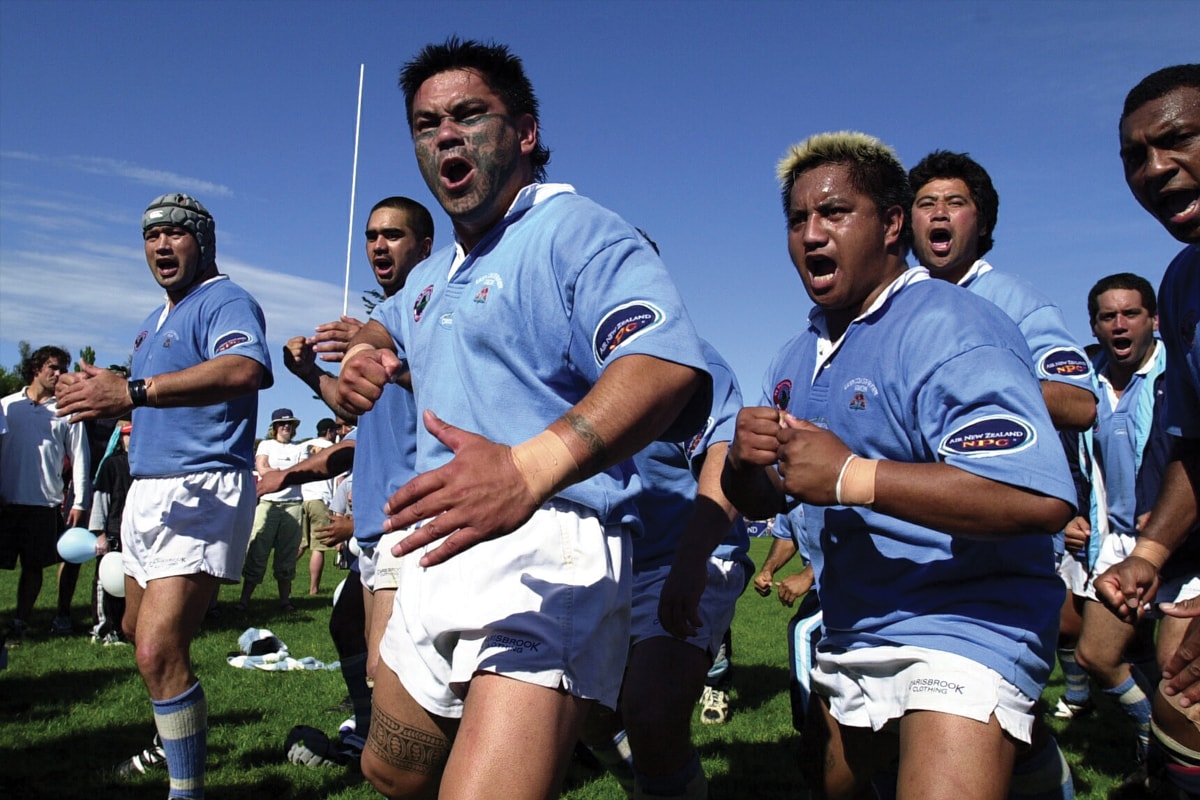 Campbell Burnes tries to condense 100 years of East Coast rugby into four pages with a nod to the past and hope for the future.

Did you hear the one about the girls who wrote to the East Coast Rugby Union in the 1930s demanding some rugby balls as they wanted to play the game just like the boys?
Or the one about the bloke who hitched a ride on the 1997 Thames Valley bus from Gisborne, saying he was in the East Coast team to play the tourists the next day? Turns out he just wanted a lift up the coast.
Or when a Coast player said he was looking forward to playing Eroni Clarke, who was in the touring 2005 Counties Manukau team: “I might have to hang one on him!”
What about the day in 2001 that this tiny union, with a sparse population of under 5000, ran Hawke’s Bay close in the 2001 division two NPC final, thus justifying a national ranking of 13 (out of 27)?
Or what about when Tokararangi won the East Coast senior club title without holding any formal trainings?
Or, get this, favourite son George Nepia missing the All Blacks trials one year because his East Coast union forgot to nominate him?!
It doesn’t matter from where you hail, you gotta love East Coast rugby. This union’s 100-year history has not been characterised by consistent success, but it does offer myriad, often seemingly mythical, storylines and a powerful sense of the game’s binding spirit for whanau and communities. Rugby is the only organised team sport played on the Coast and it just brings people together, even when life – employment and healthcare are big issues – can be a struggle.

This scribe copped first-hand a taste of the warrior spirit that can fire the East Coast players.
In 1997, Thames Valley (second division) was leading East Coast (third division) 33-14 at Tokomaru Bay. It looked like a blowout was on the cards. Until flanker Johnny Martin went berserk, in a good way, helping engineer an astonishing comeback to drive his men to a 38-33 win. Then followed a sumptuous after-match with enough crayfish to feed an army.
Never underestimate the wairua of the Coasters when it comes to rugby. They can be irrepressible in the right mood.
The Ngati Porou East Coast union, as it has been known since 2017, is about family, whanau. That’s why names like Waitoa, Walker, Devery, McClutchie, Reedy, Harrison, Kururangi, Mackey, Parata, Henare, Manuel and Haerewa are writ large in the annals of this proud rugby region.
The union chief executive Cushla Tangaere-Manuel is the daughter-in-law of the late John Manuel, who played 38 games as a lock/flanker for East Coast from 1961-68, but is better known in more recent times as the bloke who rode his horse, partially painted sky blue, into Whakarua Park to watch home rep games.
The union toasted its centenary on the Queen’s Birthday weekend, the rep team defeating Poverty Bay 28-21 to clinch the PJ Sayers Cup and giving the team its first victory in a first-class match since 2016. Then the beers and the tales flowed. Nehe Milner-Skudder was released by the Highlanders for this ‘bucket list’ match.

“It was an absolutely awesome event. It feels like it was so long ago,” says Tangaere-Manuel.
“It was just great to have some of our living legends there blending with our younger generations. Poverty Bay were fantastic, the way they honoured our celebration.”
The next day former East Coast flanker and NZR board member Bailey Mackey facilitated a panel discussion on the more recent decades of the union’s rich history.
“There were some classic moments, mischievous smiles… but it was gold to hear,” says Tangaere-Manuel.
Like any chief executive worth her salt, Tangaere-Manuel is mindful of acknowledging the past but has a clear eye on the present and future.
She wants to see more engagement with top tier provincial unions, as seen last year when the Northland Development team travelled south to play East Coast.
“We really do need more meaningful relations with our NPC counterparts, otherwise the gap between our competitions is going to become a gaping chasm.”
Among a decent calendar of events to mark the centenary, East Coast will host a Hurricanes Under 16 tournament in early October and an Under 18 Maori regional women’s tournament.
When Rugby News caught up with her, she was down in Tasman with the Ngati Porou East Coast women’s rep team. The time could be drawing closer for this team to be in the Farah Palmer Cup – if not next year then maybe by 2023.
“We always do like to punch above our weight. Our strategic goal had been to have an FPC team this year. Were it up to us, we would. That’s something we have to build a case for,” she says.
There is JAB rugby and a senior club competition to foster. Waiapu and Tawhiti are active though neither has fielded a senior team this year. Seven clubs made up the 2021 comp. But here’s the thing, East Coast has some 650 registered players through the trades, including juniors. That is around 15 per cent of the entire population on the Coast, the highest per capita numbers in the country. Some, of course, might live and work in Gisborne and further south, making for a big commute and commitment. But they do it.
“Sometimes when people plan our schedules, there seems to be an assumption, if we fly out on a Friday morning, that our guys don’t work.

For some it is three hours one way to the airport!”
East Coast coach Hosea Gear, the former All Blacks wing, lives even further afield, in Queensland. He coached by Zoom for much of 2020 and was thankful to have made it back across the Ditch to be there for East Coast’s Ranfurly Shield challenge in Napier last month. He’s only 37 and looks in decent enough nick to strap on the boots, though “that is not his intention”, quips Tangaere-Manuel.
While the hosting of Poverty Bay in June meant there are just three home games in the Heartland Championship (Buller, Thames Valley and South Canterbury), the signs look promising for this team to push up into the Lochore Cup section and divest itself of the cellar dweller tag, which has been a millstone since 2013.
On September 11, East Coast will travel to Wairarapa-Bush to help that union toast 50 years, a nice touch in its own centenary season.
Gear will have the option of three loan players and a player of origin in any match-day squad, but his first preference is to pick local, those who front every week in club rugby. Club rugby on the Coast has a reputation of being a bit loose, but it is physical and the best teams turn out some decent, hearty code. If there are holes in the roster, loaners can plug them, but Tangaere-Manuel is pleased that his approach is to look internally first rather than externally. That may pay off in the long-term.
The Ngati Porou tentacles spread far and wide. Some 75,000 people identify as part of the iwi. The union’s Facebook page has nearly 9000 likes, second only to Otago. Radio Ngati Porou keeps everyone up to date and while John Hill has hung up the quill after long service to the Gisborne Herald (and Rugby News) as the East Coast correspondent, the one and only Ben O’Brien-Leaf has taken up the voice in print.
“The book by Kevin Hare is proving popular and it was nice to have as part of our centenary celebrations. The wairua in the competition is good and the wairua across the iwi is great,” says Tangaere-Manuel.
The book she refers to is the history of 100 years of the East Coast union, compiled as a labour of love over the last three years. Hare has pored over Papers Past and all the Rugby Almanacks back to 1935 to get the detail.
Hare, aptly known as ‘Rabs’, is a passionate rugby fan who is webmaster for the rugbyheartland.co.nz and rugbyredefined.com websites. There is some fascinating stuff in there, especially back to the lesser-known early days of the union, when George Nepia was ruling the roost but rep fixtures were few and far between. It runs to 460 pages and details all 1197 players (almost the same as the All Blacks) who have worn the sky blue since 1921 (to June), when it broke away from Poverty Bay and went it alone.
The great moments of more recent times feature, as does the day the Wallabies came to Ruatoria in 1964.
“They’ve done it tough since day dot. They had a good run at times but it wasn’t until Joe McClutchie brought those guys in (and won the NPC third division in 1999-2000) and New Zealand Rugby changed the rules on them, that they went back to struggling again,” says Hare.
That said, East Coast has taken some decent scalps down the years: Bay of Plenty (x5), Hawke’s Bay (x1), Taranaki (x1), Counties Manukau (x1) and Manawatu (x1), not to mention the Cook Islands. Oh, and Poverty Bay has fallen on 40 occasions to its northern neighbours. There are 142 wins to savour from 661 matches, which tells a tale that fixtures have never been thick on the ground for this proud union, averaging less than seven each season.
There are many stories that are not told in the book, but as Hare explains, that is for another tome. This was about getting the match detail in print. Tales of Kath McLean and Bill Burdett, Wirihana Raihania and Morgan Waitoa, whose career spanned 27 years (!), survive mainly in the oral tradition. There’s more to come, much more.
“The story is about the union itself, how it was formed, how it progressed and hopefully where it goes ahead,” says Hare.
He printed 350 copies (he could do another print run) and you can still buy a copy.

*If you would like to purchase a copy of the book, visit: rugbyheartland.co.nz/wp/npec-centennary-1919-2020-buy-now