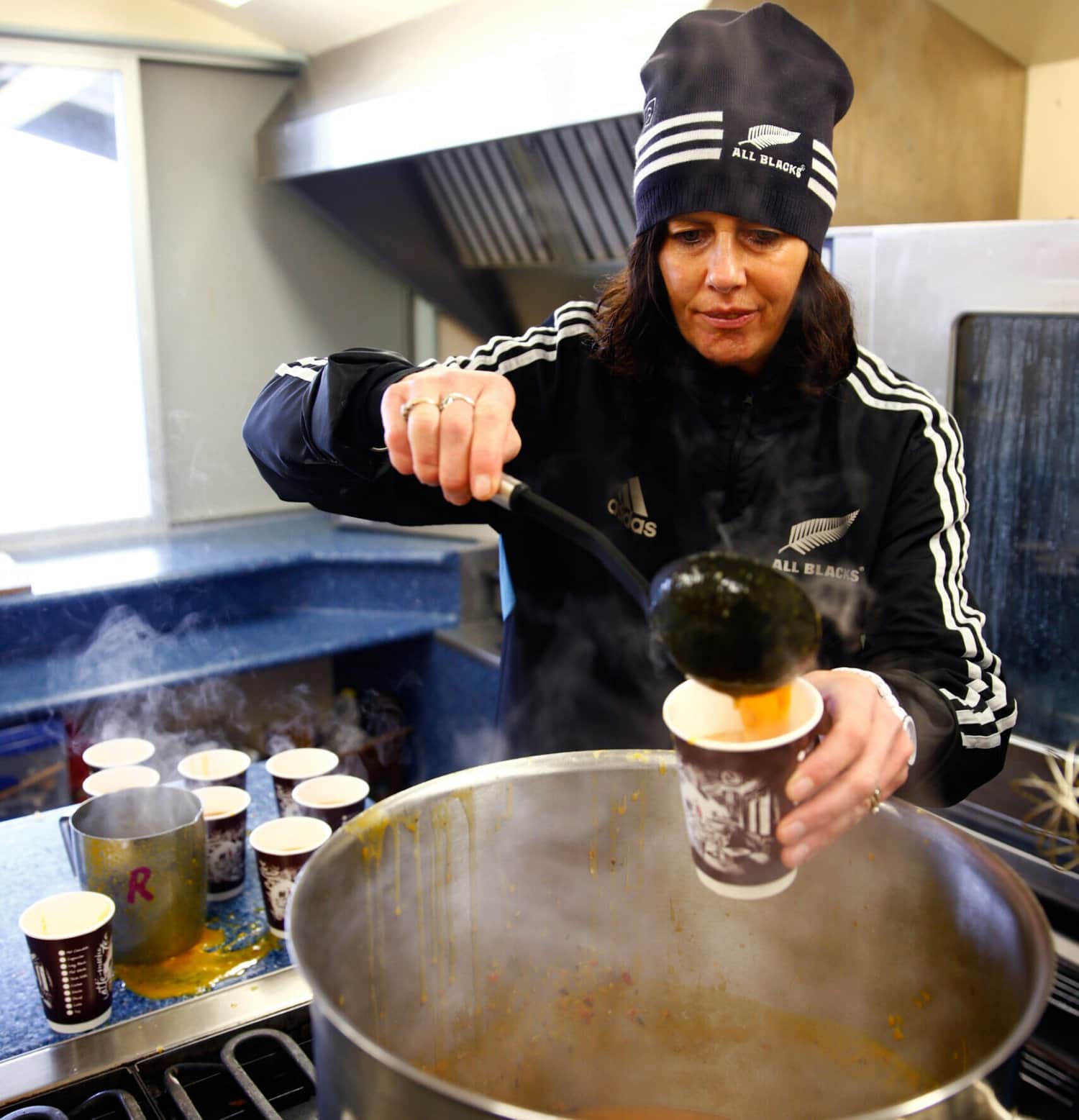 Hot soup was the order of the day after a wet, cold All Blacks training session.

In the all-encompassing modern-day pro sport world that seeks to capture any competitive advantage, it may surprise that the All Blacks first embraced a fulltime nutritionist eight short years ago. For a team that now boasts upwards of 23 staff, nutrition is the new kid on the block. Katrina Darry, whose son, Sam, plays lock for the Blues, started overseeing the All Blacks nutrition in 2008 – initially two days per week – after previously working with Otago, the Highlanders, Crusaders, Silver Ferns and Black Sticks. Post the 2011 Rugby World Cup success, Darry’s involvement doubled.

After attending the 2014 northern tour, where she scoped out hotels and meal offerings ahead of the 2015 World Cup in England and Wales, Darry accepted the All Blacks’ first fulltime nutritionist role. “It made such a difference,” Darry recalls of attending the 2014 tour. “They came back to me at the end of that year and said ‘That worked really well, what would your thoughts be about working with us in a fulltime capacity?’ Not only has nutrition for the players evolved, so has my role over the years.”

From burgers and beers for sustenance at the turn of professionalism to smoothies, supplements, whole foods and everything in between, Darry is well-placed to offer insight into rugby’s nutritional evolution. “There’s been recognition from everyone around the role nutrition plays in enhancing your weight, but also energy, recovery and mental health,” Darry says.

“As the elite competitions have grown and expectations, demands, on players grow, you can’t do it without proper nutrition. If you get that element right, it can make such a big difference to what we see on the paddock.” Rugby nutrition is no linear equation. For individual athletes it differs year-to year, week-to-week. Any team, as with society, adopts the full body spectrum that requires contrasting levels of fuel. Darry works closely with strength and conditioning coach Dr Nic Gill to ensure 36 tailored nutritional programmes cater to everyone – from the powerhouse props to nippy halfbacks. Size is far from the only quirk of fueling the All Blacks, either.

“Because we have a lot of depth within our team, they can go for a month without playing a game, depending who is picked when. That becomes a challenge as it modifies what your nutrition will look like. “You have to work really closely with the players to help them understand what that means in terms of their intake.”

Last year, the All Blacks started measuring resting metabolic rates – the calories each player needs before they get out of bed to push through gym sessions, team trainings and games “That’s allowed us to be more specific. We could see what was going in but we didn’t really have an understanding of what was being burned. That’s helped players understand what they need.”

Rookie All Blacks, having emerged through Super Rugby, are these days far more equipped to appreciate how good nutrition should look, though that doesn’t always equate to maintaining a balanced diet. In many respects, Darry’s role is part life coach as she works to establish positive habits that set the blueprint for young All Blacks to utilise their talents as long as possible.

“When I first started, they were really green because we didn’t have all the academies set up. Most of them, even at school, now are exposed to some form of nutrition.“

One of the challenges for a 19-year-old is they’ve usually just left home. They’re trying to fuel their rugby often in a flat environment while cooking and sourcing the food themselves and possibly studying or working part-time.

“There’s a massive picture to what that athlete is going through and nutrition can be right down the bottom tier. Often getting a partner or developing a relationship is what sets off good nutrition.“ When they’re with us, we literally provide them with everything. My theory is if I can show them what eating healthy looks like when we’re in camp, then hopefully they’ll take that home with them and try to adapt their surroundings rather than eating takeaways, grabbing something on the run or not eating at all, which is often the case.“ If you look after nutrition well in your early 20s, you’re going to extend your playing career by 3-5 years. That in itself is a huge investment in your primary income.”

Darry’s off-season involves liaising with chefs and hotels to plan and source all tour meals which are served buffet style. Last year the All Blacks were exclusively confined to hotels – unable to dine out at all – for 15-weeks due to Covid restrictions.

“I don’t cook, thank goodness. It would be really tough for 60-odd people. We’re lucky that we stay in amazing hotels, so the access to quality cooked meals is good 80 percent of the time.“ You can send the same recipe to one hotel and it looks amazing, and another place will look completely different. That’s some of the challenges we have when we’re in France or Italy, where they cook nice meals but aren’t always adequate for what we require as a rugby team.”

Just as New Zealanders gradually broaden their cuisine so, too, has the All Blacks menu changed. Gone are the days of solely serving lean meat and three veg. Darry must cater to all tastes and varieties. “Now we’ve got the influence of so many cultures and people eat out a lot more so it puts more pressure on the menu you present because you’ve got to try to include a lot of the different foods that people eat.”

Despite being elite athletes, there is scope for the All Blacks to indulge in the odd pie or Macca’s ‘cheat meal’ that helps keep cravings at bay – provided it’s not pre-game. “It’s working with each individual to understand when in the week it works for them. For some people, it’s their Wednesday day off. For others, it’s Sunday or post game. We call it soul food. You’re depriving yourself if you’re going to be so vigilant around good nutrition all the time.

You’re just setting yourself up to fail. “Sometimes for a meeting, I’ll put out some chocolate biscuits. It’s around making sure 80 percent of the time you’re doing things really well, particularly around your training, and then there can be the wee divergence around that.

“I’ve never had the attitude of being a diet witch. My role is to coach the player around what nutritional support works and then it’s up to them. For those who have seen the benefits, it’s a no-brainer.”

The use of supplements has come a long way from early sports drinks and creatine offerings but risks remain high in this area without proper regulation or research. The All Blacks, therefore, only use companies that are batch-tested for WADA-banned products. “You could get a protein powder that contained God knows what because no one tested it. That became a real challenge. “Those foods are a regular part of a rugby players’ diet so you need to make sure it’s not contaminated and it’s not stacking vitamins and minerals. “

The big ethos I have in the All Blacks is real food – that’s our dominant domino. That’s where your nutrients are. Over time, different products came on the market like cherry juice, blackcurrant powders, multi-vitamins. “We use a minimal amount of supplements compared to what’s available because we try to keep it simple.”

While the All Blacks lay on all meals during the Test campaign, Darry takes a backward step in the off-season, when players often blow off steam and some let themselves go before returning to pre-season training.

“I leave them completely alone. Before we disperse there will be some conversations with people who struggle with food quantity and alcohol can play a role. With weight that can sometimes go on too much, it’s about keeping that in check. I try to let them have the most input. “

There’s a certain minimum you’d get by eating a basic diet and takeaways a lot but to go that extra five percent, and to back it up, nutrition absolutely can make or break success. “If a player turns up to a training session and is not ready to go, a coach can see that. It not only affects your ability to adapt and grow but it lets your teammates down. It can take years for players to understand that.”