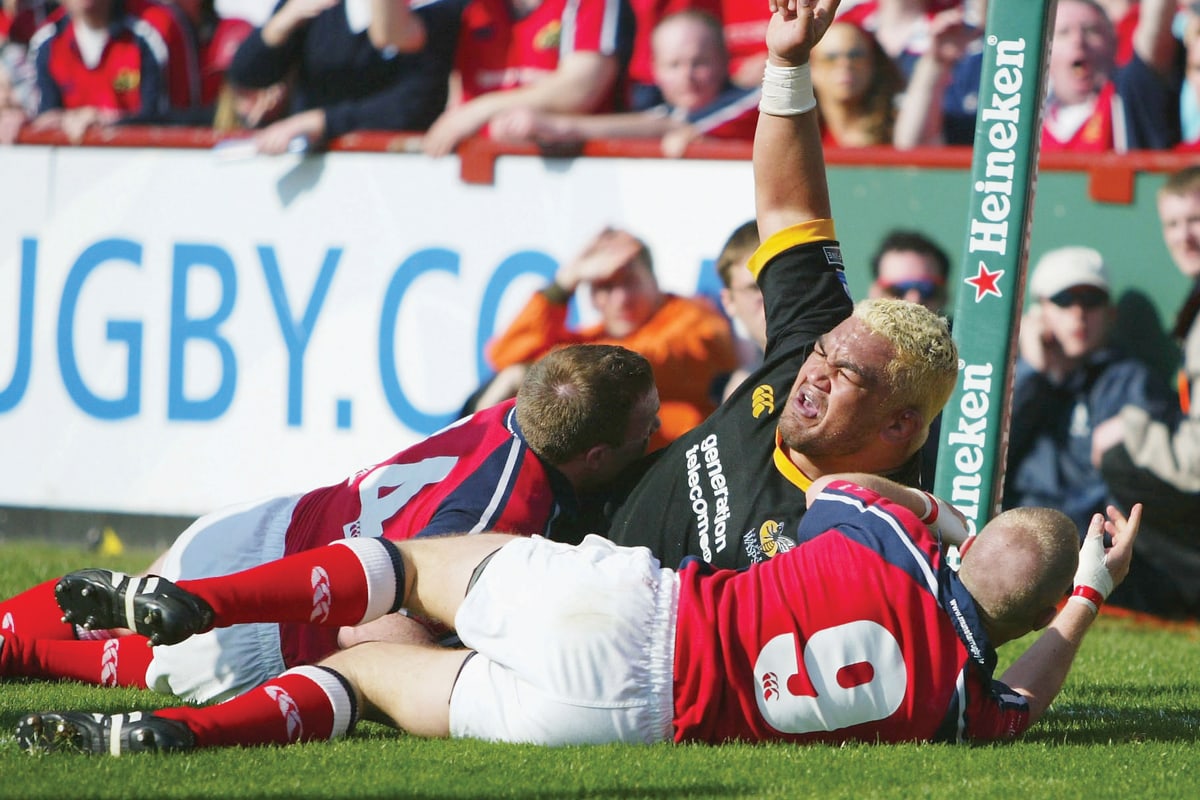 One of the great moments of Leota’s career, scoring the winning try in the 2004 Heineken Cup semifinal victory over Munster.

Campbell Burnes discovers an old Manu Samoa teammate still loves the game with a passion, even after one of the more colourful, nomadic, careers of the pro era.

Everyone has a Trevor Leota story.
Here’s two of mine.
The first came at Colin Maiden Park in 1994, when my Auckland University side was playing Te Atatu in reserve grade. This pint-sized hooker, fresh out of school with a fancy haircut, burst through the ruck, stepped the wing and then chipped over the top of the fullback, with his left foot, regathered on the full and scored by the posts.
My first thought was: “Who the f*** is this kid?!”
Less than 18 months later we were debuting for Manu Samoa together in the north of Scotland. It was cold and dank. But the cloud was about to descend on Leota. He flew through the air like an Exocet missile to make a tackle on an unsuspecting opponent, who turned his body slightly. The flying Samoan was knocked out on his hip. That was the end of Leota’s first tour of duty for the Manu. Ten minutes, tops.
He tackled like thunder, making him a feared opponent the world over. But this was allied with the softer, skilled touches which many have forgotten when they catalogue his career. A more loyal, generous teammate you would, however, be hard pressed to find.
I could not believe this pocket rocket was still playing the game at 45, with a body that is crying out for mercy but with an indomitable spirit that loves the game too much to just walk away.
He’s a grandfather now, living near his son in Melbourne and working for Remedy Housing, which provides interest-free mortgages for those in need. It’s no surprise that Leota is in this line of work. He’s always been about helping people. In the rugby sense, it was making sure his teammates were safe and happy, while he was always willing to share a drink with fans.
His Mum lives in Sydney, where he spent some time before relocating to Melbourne, while his daughter lives in New Zealand.
Leota himself was born in Auckland and one day, when the time is right, he’d love to return home.
This year was a write-off for rugby in Melbourne due to Covid-19, but he was hoping to line up alongside his son at the Harlequins club.
His body has taken a beating over 30 years. Those shoulders must be stuffed after all those heavy tackles? Actually, no.
“I’ve had no operations on the shoulders, but the legs are painful. I play rugby and then the next day I can hardly walk. I’m still struggling,” he says.
But there is a happiness that goes with the pain that only those who truly love the game can understand.
“I just love the game, bro. If I ever died on the field, just leave me out there!”

His rugby journey started in west Auckland, where Graham Henry was instrumental in bringing him to Kelston BHS, where he played with Kees Meeuws, among others. Wider recognition came in the same NZ Schools team as Jonah Lomu, Jeremy Stanley and Carlos Spencer in 1992. His blend of explosive running and bruising defence was a compelling mix. By 1995 he had played for Auckland and was on New Zealand rugby’s pathway, but he opted for Manu Samoa. His family villages are Saleimoa, Faatoia and Vailele.
After the hiccup of his Manu debut in 1995, he had some competition at hooker in Tala Leisamaivao, Taniela Fuga, Mahonri Schwalger, Onehunga Matauiau and Ace Tiatia.
When he made his Test debut in 1997 at Apia Park against Tonga, that rated as the proudest moment of his career.
“Just seeing the reaction of our people. I hadn’t been back in ages. It was huge,” says Leota.
He went on to rack up 30 Tests, played in the 1999 Rugby World Cup and won friends and admirers the world over.
Leota only made himself unavailable once, for the 2003 Rugby World Cup. It’s something he regrets, in hindsight.
“That was a mistake, but it was one of those things. You live and learn. We had 21 or 22 internationals at Wasps. Most of them were English, so we were losing a lot of players.”
But for the most part, his time at Wasps was a happy period in his career. There were the trophies – two Heineken Cups and three English Premierships – and a heap of mates.
The 2004 Heineken Cup semifinal, in which Wasps beat European heavyweights Munster in the semifinal in Dublin, is Leota’s career highlight.
“I scored the winning try. Our supporters were passionate, and there were about 2000 there that day, but it was a sea of red.”
Records vary, but he reckons he racked up over 250 games for Wasps, which represents an unthinkable amount of trainings and scrums and mauls and heavy contacts.
Leota stories from his time at Wasps are legion, but he reckons it was a slight exaggeration that S and C coach Paul Stridgeon stayed at his place for the fortnight leading into the 2004 Heineken Cup final purely to keep him away from the KFC.
He was, however, banned from tackling at Wasps trainings so as not to injure his teammates. Leota’s tackling style would see him in trouble these days, but there was more leniency 20 years ago. But, though he was sent off in the 1999 Samoa-France Test for a high shot, and copped his share of cards, Leota was no dirty headhunter. He was more than just a big hitter, too.
“My tackles were always highlighted, but I could do more than that. But that’s the way it goes,” is his philosophical response.
His relationship with Wasps long-time coach Warren Gatland was better than many think.
“Gats was awesome. He was hard, straight up the guts, no mucking around. When it was time to play and train, he was tough, but when it was time to relax, he was awesome,” says Leota.
Awesome is, need we say, one of his favourite words.
After his Wasps days were over, following nine and a half seasons, he washed up in Bloemfontein as back-up to Naka Drotske, winning a Currie Cup medal in 2005. His Super Rugby lasted just one game, in 2006, before injury struck.
Mont-de-Marsan was the next destination, in the French Top 14.
“It was hard, money-wise, but we went well. The other teams were getting paid millions, but it was a good comp.”
There was a stopover in Dubai, starting up the Dubai Wasps with Apollo Perelini, before he made his home in Canada for several years, mainly around Edmonton.
“The culture’s awesome. The top three or four teams were serious, but a lot of others are social. But we won a few trophies there, so that was good.”
In the compelling Oceans Apart podcast series, Leota explained how much he loved the game, but it had cost him his marriage and he tended to
spray his money around in the early days, with no real guidance for the early young pros.
The likes of Dan Leo are giving professional Pacific Island players a voice now, and Leota has nothing but praise for his work.
“It would have been way different if we had that back then. I tell my business partners that it’s time to redeem myself now in the working world and get to give back to my kids.”
That’s Trevor Leota, one of the great characters of rugby.
The game giveth and the game taketh, but he is still giving.