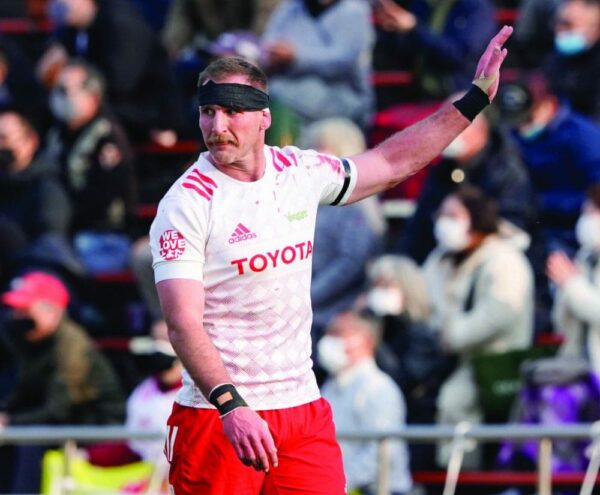 And just like that, it was over: Read’s 15-year pro career ended in Japan last season.

New Rugby News columnist Kieran Read writes about some of the mental challenges that come with hanging up the boots after a long professional career.

The transition out of a long playing career is never that straightforward, even if you have plenty of time to think about it.

For me, it was a bit strange. I was finishing up in Japan, then two days later I was in quarantine in New Zealand. I was thinking, ‘Man, I’ve just ended my rugby career and now I’m sitting in a hotel room by myself.’ So much for the accolades! It kind of brought you back down to earth as to what is happening in the world when you sit there by yourself in isolation.

I always had ideas about my future but, from that hotel room, Kieran Read Leadership was born. In those last years of playing, I had thought about getting into something based around leadership, drawing on my own experience. But it’s hard to give enough of yourself to something when you are fully immersed in the game.

So that was the start of my new career. But I’m still in transition and getting it all set up. It’s quite exciting but I’m nervous at the same time, because there are all these emotions that go through your head when you finally pack up the boots after a long time. I’m going to be doing some one-on-one leadership coaching/mentoring and there’s a Captain’s Club, which is aimed at schoolkids and club players of any sport. It will be passing on some tips about captaincy and leadership, areas I’m passionate about and where there is a need to help young athletes in the leadership space.

On the playing side of things, it finished well with two stints in Japan and a campaign with the Counties Manukau Steelers. Covid-19 did complicate things, not having the family up in Japan. They missed out on the travel that comes with me playing in a foreign country. I was always going to have those couple of seasons post-Rugby World Cup to ease down but still play some rugby, enjoy it and plan my exit.

The one thing you have when you finish and you’re not straight into a fulltime job is time. Weekends were back, you could go to BBQs with friends (which normally is rare during rugby), and you get more time with the kids.

But it’s funny, after 15 years of being on the schedule, looking at the calendar, making sure you’re here at this time, now suddenly, wow, you can do whatever you like. It’s empowering but also a bit scary after so long. That was a big change.

So I found I needed to get some structure to give my day some purpose, otherwise you would just slowly get out of bed, take the kids to school and then work out what you were going to do for the next few hours.

Coming out of a heavy schedule and routine with the Crusaders and All Blacks, that was a massive change. But it’s nice to be able to go on your own run or just decide not to exercise that day if you so choose.

I wasn’t necessarily a big runner during my playing days, but when I finished I just didn’t feel the pull of the gym. I was gymed out. I haven’t touched any weights since Japan. So I found that running has become my outlet now for physical exercise. I struggled at first to even get through 5km, but now I get up in the hills for a couple of hours, perhaps with some mates. That’s been enjoyable and that’s given me a nice purpose. If I don’t do it for a couple of days, I start to get a bit tetchy.

I completed a bit of the Old Ghost Road. Last year I did 55km in a day, so that was pretty cool to tick off. We got a helicopter into the middle of the track at one of the huts and it was 55km out, so it was a run/tramp. It was tough in the middle, but we got through it in seven or eight hours. The scenery was great.

In April, I’m looking at having a crack at adventure racing in Kaikoura with some mates.

So my weight has dropped from when I last played. It must be the lack of protein, supplements and weights. But I’ve gone under 100kg now. Some people might think I’m too skinny! It’s just been dropping off me. I had to work quite hard to keep my weight on for rugby, so I had to eat a lot. Now I don’t have to smash back all the shakes.

Every time you catch up with some of the guys who have retired, you hear the stories. Some tell you how tough it is and how hard it is to prepare for until you are into it, especially mentally. There is a certain loss of identity. We are fortunate to play the game for a living and some of us for a very long time. But you then swiftly go from Kieran Read, All Black, to Kieran Read, former rugby player. I thought former players would be keen to come back into the fold for a yarn, but once you step away, you want the teams to have their space.

When I was playing, I couldn’t really get the gist of that view. It’s not that you’re not welcome, and you can always go back if asked, but you don’t want to push yourself on them.

The biggest thing I’ve missed is that social connection. For 15 years you turn up and see your best mates every day, you train hard together, you laugh together. Taking that away can be hard. We can do more in that space to look after guys when they finish, along with the good work the NZRPA and NZR does now. I’ve been positive much of the time, but just on the odd day, you feel that pang. Everyone I talk to who has retired feels the same.

I definitely watch more rugby now than when I was playing. Back then I would watch the rugby you needed to watch, which was the next team you were playing. I’ve always loved sport and watching it on the box. My wife will tell you that!

I feel indebted to rugby for what it’s given me. So I will stay involved in some capacity and doing some comments work for Sky TV is quite cool, catching up with other former players and giving some insight for the fans. Hopefully I’m still a relevant voice. And, of course, through this column too.

My boy (Reuben) has just turned five so he is at the age where he is starting to get more into the game too.