BRINGING THE FANS TO THEIR FEET 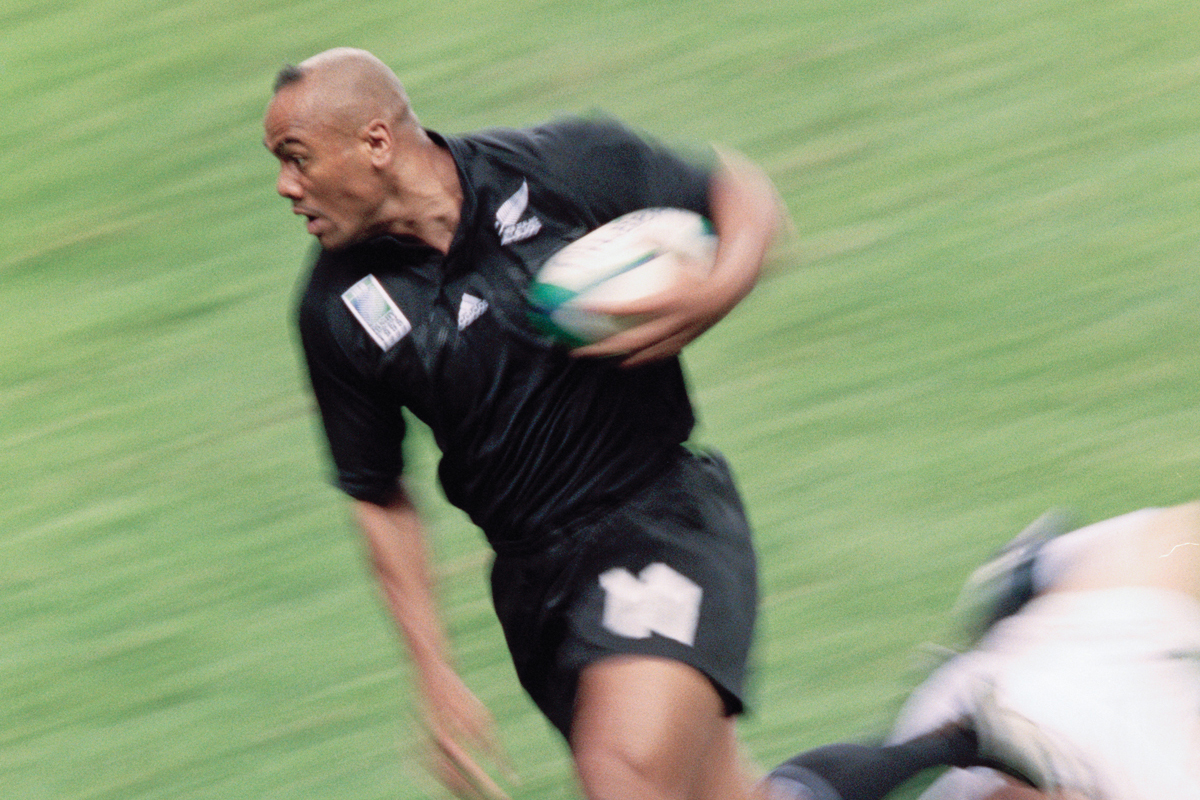 Lomu’s try against England at RWC 1999 was one of his greatest.

Jamie Wall recalls how the one and only Jonah Lomu brought people together and on their feet in his pomp.

It was a Wednesday morning in November when Jonah Lomu died, two and a half weeks after the All Blacks had won the 2015 Rugby World Cup.
All the news around rugby had been extremely positive around that time. Not only had the All Blacks done what they set out to do, but they’d done it in style, avenged the 2007 Cardiff performance against France with a resounding win, answered critics of Dan Carter’s selection and sent out five legends of the team on a winning note.
Now, as the nation prepared for Richie McCaw to announce his retirement, the news came through that the most important All Black of all was gone. Richie called off his press conference. He knew full well that Jonah’s passing was far more important, without the deeds that the winger had done it was unlikely that the All Blacks captain would have the career he did. Neither would have anyone else who had pulled on the black jersey since.
I’m from Generation Jonah. I was 13 when he made his inauspicious All Blacks debut, right when the childhood interest in rugby was hardening into a slightly obsessive fixation. Five years later, I found myself in a random flat in Newtown, Wellington, on a Sunday morning to watch the All Blacks play England.
It was 1999. Earlier that year, Jenny Shipley had chucked out an unsuccessful election bribe to everyone my age by lowering the drinking age to 18 and my year group had thought we’d hit the jackpot until we realised just how much drinking in bars costs. However, we put our pocket shrapnel together and all of a sudden I’d passed onto the next phase of All Blacks fandom – being drunk and rowdy and not actually remembering a lot of what I just watched. But there was something in the All Blacks’ showdown with England at Twickenham that I’d never forget. No one else will either.

The previous years of Lomu-mania were better spent as a cleancut kid anyway. The 1995 World Cup, the ridiculous sight of a man that big on a sevens field in Hong Kong, the pink hair and tears on the Holmes show. The move to professionalism that he essentially forced like a brutal run to the line was too complicated for us at that age. All we worried about was how many tries Jonah would score.
He filled stadia. The perennially turgid Wellington team of the ‘90s got its biggest crowd at Athletic Park on one of the worst days of the year, weather-wise (for Wellington, that’s really saying something) simply because Jonah was turning out for Counties.
The flat we had ended up in to watch the 1999 World Cup pool game was just down the road from Athletic Park. It was a typical scungy abode, with a tiny TV. It belonged to a mate of a mate who had invited us around, who turned out not to have even been there when we showed up at 2am. It didn’t matter, the two other flatmates who were there wanted someone to watch the game with anyway in the confines of the mouldy lounge.
Were we nervous? Absolutely. The year before had seen the All Blacks lose five Tests in a row and the current season had seen a record loss to the Wallabies. But then Jonah went and did what Jonah does. To me, the try he scored that day at Twickenham is his greatest, more so than the famous bulldozing of Mike Catt in 1995. Just after halftime we were glued to the edge of the decrepit couch with the score locked at 16-all and England on a serious surge of momentum when it happened.
Cully put in a thumping tackle that stopped the white wave in its tracks. The ball went out to Mehrts, who floated a pass that hit Jonah on the chest 60 metres away from the tryline. We sat up as he turned on the afterburners. Guscott came at him, got swatted off, 50 metres. Austin Healey tried his luck and ended up transformed into a human turnstile, 20 metres. All Matt Dawson got was a handful of Jonah’s shorts, 10 metres. Then he dived over, pummelling the ball into the Twickenham turf for the greatest try of his career.
Back in Newtown, we were on our feet, hugging our newfound friends and starting a ‘Jo-nah, Jo-nah’ chant at the top of our voices. Our delirium was shattered by loud and angry footsteps down the hall – someone wasn’t happy. The missing flatmate’s girlfriend had been in their room the whole time and came in to tell us to keep it down, but she found herself swept up in the emotion as we pointed to the screen so she could see what Jonah had just done in slow motion. Through the early morning light, I could see the hint of a smile emerge as she witnessed the rampage of destruction, before she reverted back to her foul mood and said we all needed to leave when the game was over, then stomped back to her room.

Kelleher tacked on another try to make it 30-16 and blow the score out to a margin that made it look a lot more comfortable than it had been for the All Blacks. But it had all come down to one moment, that only one man could achieve. We obeyed the girl’s instructions and left the flat after fulltime and a lasting shot of a very content Jonah, out into the sun rising onto what would be a beautiful day in Wellington. We walked up to Athletic Park, jumped the fence and ran on the field. I rolled up my jersey and we recreated what we’d just seen, running down the field past imaginary Englishmen, with our voices echoing through the empty grandstand.
Of course, Jonah ended up being one of the only ones that could really come home with his head held high after that tournament. He scored two more on Twickenham in the ill-fated semifinal, both perfect examples of the way Jonah played.
But there was something we didn’t know – the high water mark had been reached. Even though he had one more epic part to play in winning the most incredible Test ever played the next year, Jonah Lomu’s All Blacks career would decline because of the kidney disease that had been plaguing him his whole career. He came to Wellington, helped win us only our third NPC title with another beautiful rampage down the wing in Christchurch. He gave us so far the only rugby video game that has stayed firm in the cultural consciousness and inspired plenty of kids to go outside and pick up a ball.
I found out Jonah’s illness was bad, bad enough to rob him of years of his career that would have given us so much more to cheer about. But November 18, 2015 was still a shock. I put my head down on my desk and tried unsuccessfully not to cry in front of my workmates. Jonah was gone, the man who had pulled rugby into the modern age had been felled by something that should have never seen him go on a rugby field at all.
What we wouldn’t give for someone like him again. Until then, all we can do is regale kids with stories of being proud members of Generation Jonah.