BACKING UP IS VITAL 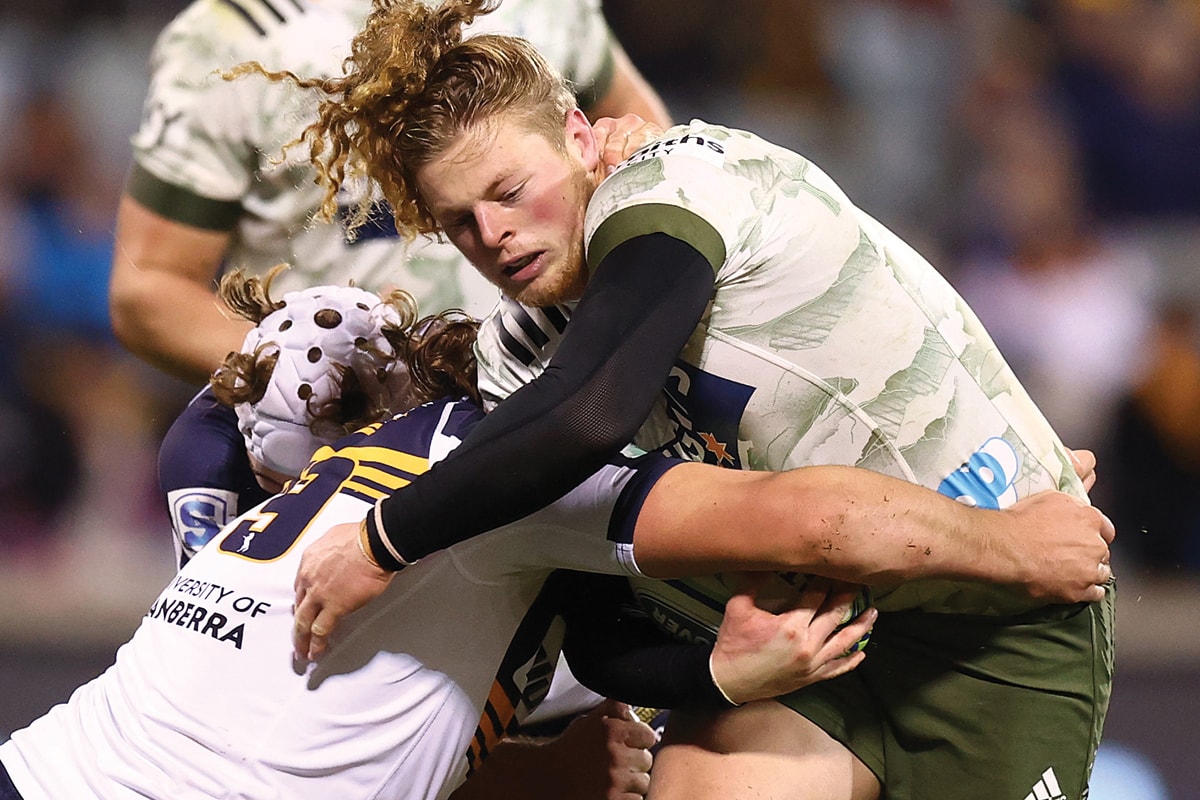 Scott Gregory and Hugh Renton were two Highlanders who seized their opportunities in 2021.

Aaron Smith reviews the Highlanders season, which saw some inconsistency along with big highs, including making the Super Rugby Trans-Tasman final, while showcasing some prime talent.

It’s been a season of two parts, with two separate competitions in their own sense.
We looked at the Trans-Tasman competition as a chance to change people’s perception of us and try and do something we didn’t do in the Aotearoa competition, which was win back to back games and get up again after getting up for the big ones.
We wanted to give ourselves a chance to make the Aotearoa final, and so we were disappointed. We had to win four straight and won the hardest one, over the Crusaders. Then we lost in overtime to the Chiefs. I felt we were a better team, but they were desperate and we didn’t respect them enough because we were still thinking about the week before and patting ourselves on the back, if we are being honest. We ended by beating the Blues at home the week after that, but then played poorly in the last game at the Hurricanes.
We learned that we are a good team but when we don’t prepare accordingly, then we don’t nail the little things in our game and if we don’t respect the opposition, we can be average.
So that was the honest feedback we took into Trans-Tasman. I’m really proud to say some of our young guys sacrificed a bit more for a month and we made a final. We had to do it the hard way, too, with an extra away game against the Rebels in Sydney, which was supposed to be our home game. We earned the right to play in a decider.
To win five in a row is no mean feat, out of a squad with just three All Blacks in it. There are some good teams out there but what we were able to create with our culture, our want, our game plan and our coaching, we were able to play some good, attractive rugby.
I reckon our two best games were the wins over the Crusaders in Christchurch and over the Brumbies in Canberra, both by the same score (33-12). Both were at critical moments for our season.
In my 10-year career with the Highlanders, I’ve only beaten the Crusaders twice up there. I’ve played them twice a year for 10 years. I’ve lost heaps on that ground, and some of them have been horrible. It’s tough to win there, but the best part is that we finished really strongly then. The thing is that we had to take the lessons and back it up, as we did in the Trans-Tasman comp.
Our environment is player-driven, but Browny (Tony Brown) still had massive input even when he was in Japan and Derms (Clarke Dermody) was doing well on the ground and no one can take any credit away from him.
Our leaders have been great, from Ash Dixon to Billy Harmon, who has been a godsend from up the road. Mitch Hunt runs our game. Michael Collins runs our defence and we also have Bryn Evans, who runs our lineout. We have high quality players and characters in key positions. It works for us.
We had so many injuries in the back three, but Jona Nareki played so well for us this year and he was brilliant for us in 2020 too. He’s a funny guy but when he puts his boots and mouthguard on, you can trust him to do a job. With Scott Gregory going so well in the midfield, we needed to get Sio (Tomkinson) in the team and on the wing he brings physicality and game smarts. His defensive ability in those wide breakdowns is critical.
Scotty got badly slated on social media and in the media for one game last year, which was unfair, but he’s been one of our most consistent performers at 12. He’s earned that jersey. He’s a great trainer and a big, physical guy. No 12 suits the type of player he is. Sometimes you just need a coach to back you and Browny has backed him.

Mitch Hunt is outstanding to play with, he’s a true professional. He’s a clear, calm leader but he’s gutsy and composed in those big moments. He allows me to just concentrate on getting the forwards revved up! He’s been easily one of our best performers this year and we’re blessed to have him come down from up the road and embed himself in our culture. Mitch has been the glue to our whole game.
We’ve had some injuries in the loosies, but we are blessed with real depth in our stocks. Guys have stepped up for the likes of Shannon Frizell, Liam Squire and Marino Mikaele-Tu’u. Hugh Renton has taken his opportunity with his toughness and ability to steal the ball is second to none. Billy is a top allround rugby player and Kazu Himeno is just a great rugby player with a good brain. The language barrier doesn’t matter. He just knows how to play rugby and does it with passion and vigour through his tackling and jackling.
In the locks, great to see three Highlanders make the Maori All Blacks. Bryn Evans, too, has shown that age is just a number. It gives me more hope to hang on! Bryn brings calmness to the lineout and that helps Josh Dickson and Paripari Parkinson go about their work. A lot of set-piece tries come from our lineout and he’s key to that.
In the front-row, we’ve had a guy like Ethan de Groot, who is just 22 and had played just two games for us before this season. He’s learned to prepare and just taken his opportunity this season.
Those young guys like Ethan, Scotty Gregory and Connor Garden-Bachop have big futures and will only get better.
We are very lucky at hooker because we have two tough, resilient guys who hardly get injured and it doesn’t matter who starts. Ash is our spiritual leader, a doer not a sayer. I have the utmost respect for him. That 1-2 punch with Colty (Liam Coltman) is critical for us. They’re both 100-cappers and they push each other.

AARON SMITH is the world’s leading halfback, with 97 Tests for the All Blacks; he is also the co-captain of the Highlanders.