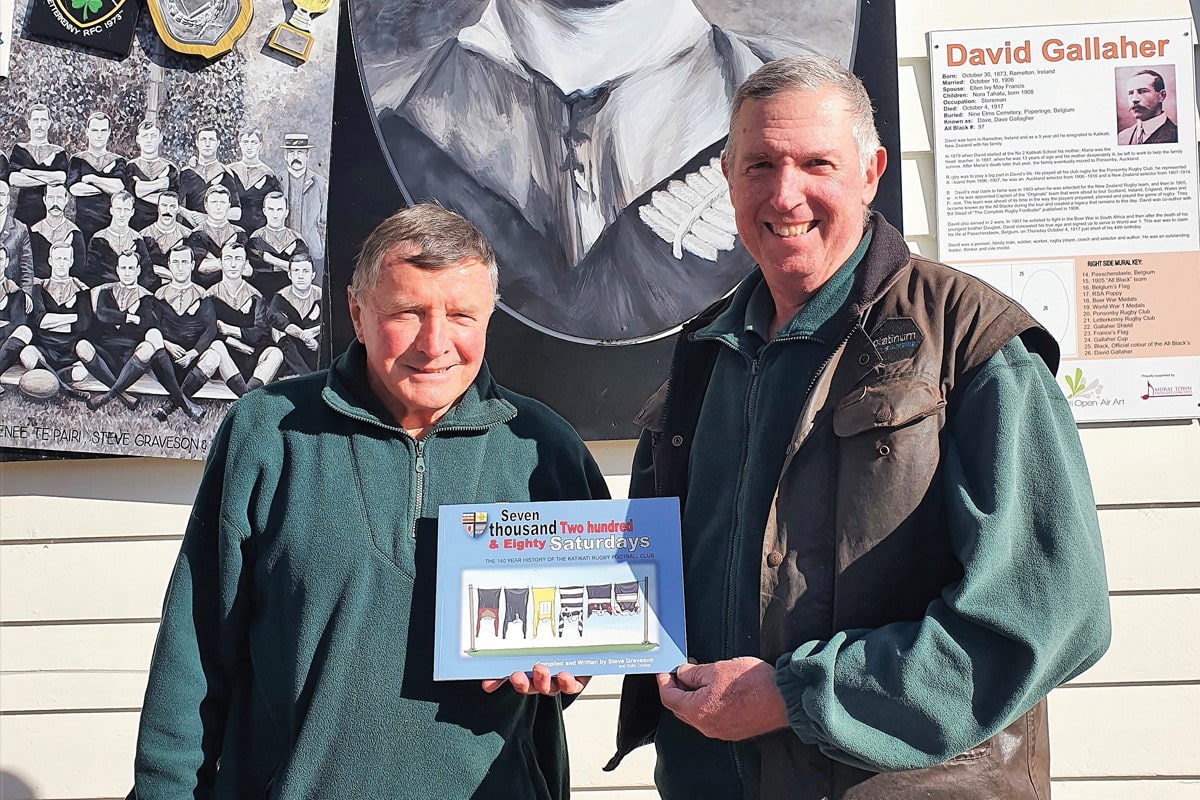 Peter White looks over 140 years of rugby played in Katikati.

Covid-19 did its best to delay the celebrations by a year, but eventually rugby was the winner.
Last month, over the weekend of July 9-10, the Katikati Rugby Football Club finally celebrated 140 years since the game was first played in the picturesque town situated on the northern end of the Tauranga Harbour.
A meet-and-greet opened festivities on the Friday night of the celebratory weekend, before a large gathering of past and present players, supporters and family members got together for the main dinner on Saturday night.
A highlight was the open mic part of the evening where past players could share their experiences and plenty of tall stories.
Earlier in the day there was rugby to watch with Under 12 and Rippa Rugby teams in action before the Katikati seniors played Papamoa in the afternoon.
Katikati is one of the oldest rugby clubs in New Zealand. It was established on June 28, 1880, at a public meeting held at the Uretara Hotel after the first game was played between Katikati District and Tauranga County.
The spirit of rugby was evident even back then. The Tauranga team arrived two players short so the Katikati team, with a full squad, elected to play with equal numbers.

It was just two years after the notable arrival of the second boatload of Irish settlers on the Lady Jocelyn. On board was the Gallaher family from Belfast, including young son David who would become one of the most famous names in New Zealand rugby.
Gallaher captained the iconic 1905 Original All Blacks on the tour of Great Britain and France and lost his life in World War One. His brothers later played rugby for Katikati.
That first game was played at Hunter’s Paddock, one of five grounds used by Katikati as home base since 1880, followed by Lockington’s Paddock, Preston’s Paddock, Uretara Domain and, from 1971, the current headquarters at Moore Park.
Mac Moore, the Tauranga County Council chairman at the time, was the catalyst in getting today’s impressive facility off the ground.
The grandstand was constructed in 1969-70 by local builder and rugby supporter Hilton Rayment, who had a lot of help from club members. It was extended in 1984 to include a kitchen, bar and clubrooms. In 2007, the grounds were enlarged with the addition of more playing fields and a cricket pitch on land behind the grandstand complex.
Katikati originally was a member of the Goldfields union, which became Thames Valley in 1922, as Waihi was the big town in the area due to the gold mines. In 1911, Katikati joined the Bay of Plenty union, so at one stage it was the only rugby club in New Zealand to be affiliated to two unions.
In 1965, Katikati became formally affiliated to Bay of Plenty alone and has produced some outstanding players for the Steamers ever since.
Elusive winger Graeme Moore became the club’s first Bay senior rep in 1967 and to this day is still the union’s top tryscorer, with 62 tries from 114 games between 1967-80. His brilliant effort against the 1971 British and Irish Lions is a career highlight.

Durable prop Peter Kennedy was a no-nonsense character who played 101 games for the Steamers. He forever claims that the ‘try’ he scored against Canterbury in Christchurch in 1984 that was disallowed at the end probably cost the Bay the Ranfurly Shield that day.
In 2011 Moore and Kennedy were named in the Bay of Plenty team of the century to commemorate the union’s centenary.
Lock Mark Weedon, who was MC for the Saturday night celebrations, captained Bay of Plenty and also played for North Harbour, the Crusaders and Chiefs. He made his debut for the Steamers against Auckland, marking Andy Haden while still at Katikati College in 1986. That season, Katikati won the Tauranga-Te Puke division one title for the first time.
Another former Katikati player, Greg Davis, became Australian captain in 1969.
It is fitting that a book has been published to celebrate one of New Zealand’s oldest rugby clubs, with one of the longest titles of a rugby publication – Seven Thousand Two Hundred & Eighty Saturdays.
The work is a labour of love by club historian Steve Graveson, with help from club president and life member Rollo Dunlop.
“It was interesting deciding on what the title was going to be,” Graveson says.
“Don Lecky did a booklet on the club’s 100-year anniversary, and once you start researching you find it is such an interesting history. It involves so many different families and it just tells the history of the whole of Katikati really.”

Graveson played rugby for the club in his younger years. Dunlop’s family joined the club in 1954, and he did not hang up his boots until he was 41.
Graveson did the painting that adorns the front cover of the six Katikati jerseys in mostly black and white colours worn over the years. After hundreds of hours work and input from many local identities, the book went from 50 pages to the final 112.
The community aspect of the club is well covered, with several families spanning four generations at the club, most notably the Johnston family.
“They still have involvement now through club treasurer Mike Johnston. They were right there at the very start,” says Dunlop.
“The dairy industry was the key to the income of the area throughout, but the club has a history of ups and downs throughout its history.”
Katikati is known as Mural Town thanks to a number of excellent works depicting the town’s history on show along the main street. The latest to grace the walls is a mural of nine portraits to mark those who have contributed so much over the rugby club’s 140 years.
Former player Jason Manukau began work on the project last year but has been stuck in Australia due to Covid-19 so it is not finished yet.
When the mural is done, it will be a fitting way to celebrate the first 140 years of the Katikati Rugby Football Club.